- January 24, 2016
As a child, I was never an avid reader, but it was never because I didn't want to be one. It was due to the fact that all the books that teachers and the school librarian would recommend to me were just boring and didn't hold my interest. It wasn't until I was 10 that I became an avid reader, and it started with the Sweet Valley Twins series followed by the Babysitter's Club series and Nancy Drew. In middle school, I began reading young adult novels . . . everything from teen romance to horror to books featuring kids/teens with life threatening diseases.

Do you have a child or teenager who isn't interested in reading books? Try one of these book series or trilogies that made my top ten list for young adults. In no particular order, below are the Young Adult Book Series and Trilogies that have stood the test of time.

Secret Diaries
by Janice Harrell
Joanna decides to move in with her father after her parents divorce. New to town, she's determined to do well in school. While making friends with Penn Parrish and his group of friends, Joanna learns that one of their friends is missing and begins to investigate. Does Joanna learn more than she's bargained for? 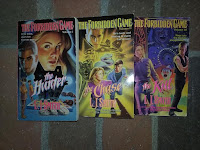 The Forbidden Game
by L.J. Smith
Jenny Thorton wants to make her boyfriend Tom's birthday party more fun with a game that is different than what they normally play. Finding a new spooky game store that specializes in unique board games, Jenny buys one from the sexy teen salesman, Julian. When Jenny, Tom, and her friends begin playing the game at the party, they're transported to another world where they have to face nightmares, or die trying. 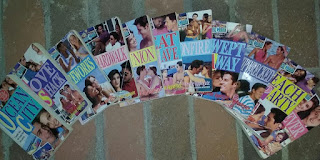 Ocean City
by Katherine Applegate
Kate wanted one last summer adventure in Ocean City before going to college in the fall. When Kate and her best friend, Chelsea, arrive at the rental house a day late, they find that the landlord rented it to someone else. Desperate, the girls rent a house they can't afford and have to find roommates . . . stat, only to find out that Kate's old flame from the summer before is renting out the boathouse. 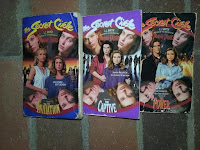 The Secret Circle
by L.J. Smith
Cassie Blake and her mother move from sunny California to New Salem, Massachusetts after their vacation in Cape Cod to live with Cassie's grandmother, who isn't doing well. Struggling to fit in at the new school, Cassie soon realizes that things may not be as they seem when strange things begin to happen.

Wild Hearts
by Cheri Bennett
Drummer Jane McVay is forced to move from NYC to Nashville, Tennessee where she is sure everyone is a redneck or a debutante. Making friends with Kimmy, Savy, and Sandra, Jane realizes there is more to Nashville than just country music and debutantes when they form an all girl band.

Dark Visions
by L.J. Smith
After a massive search for psychic teenagers, the Zetes Institute invites a select few to hone their abilities at their facility. Kaitlyn Fairchild jumps at the chance, tired of being branded a witch in her small hometown. During an experiment, the five teens become bound by a psychic link. While trying to break the link, the teens learn that the Zetes Institute may not be what it seems.


The series starts with The Silent Scream, where a student committed suicide in an off campus dorm at Salem University. The series has lots of eerie happenings on the campus. Read on if you dare . . . you may not survive college.

Making Out
by Katherine Applegate
Just off the coast of Maine is a small island by the name of Chatham Island that houses 300 year round residents. Follow the trials and tribulations of the small group of high school friends as they fall in and out of love. The series also is known by the names of BoyfriendsGirlfriends and The Islanders.

Sunset Island
by Cherie Bennett
Emma, Carrie, and Sam become fast friends on Sunset Island, where they've been hired as au pairs to the children of the wealthy and/or famous who vacation on this tiny island off the coast of Maine.