The All Souls Trilogy: Atlanta Conventicle 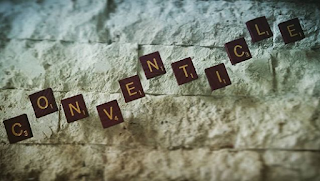 1.  a secret or unauthorized meeting, especially for religious worship, as those held by Protestant dissenters in England in the 16th and 17th centuries.
2.  a place of meeting or assembly, especially a Nonconformist meeting house.
* Definition & pronunciation from Dictionary.com.
The All Souls Trilogy by Deborah Harkness, which encompasses A Discovery of Witches, Shadow of the Night, and The Book of Life, has a cult following around the world. So much so, that it has a Facebook Group with over 8,000 members from all over the world and is growing every day! The series also has a annual convention that was held in New Orleans in 2017 and is scheduled to be held in Philadelphia in 2018. Those who couldn't attend in person this year were able to attend thanks to live streaming.
Many people that were unable to attend either in person or virtually wanted to meet in person, so events started popping up in the Facebook Group. In Nashville, they met at a cool looking tea room and store called High Garden. In London, they were able to meet some of the cast of the television who were filming on location.
In the state of Georgia, people from all over the state met in Sandy Springs at Another Broken Egg for the Atlanta Conventicle. One of the admins lives in Atlanta and put it together. Because the restaurant doesn't take reservations, she got there 30 minutes early to put us on the list as we had a fairly large group of ten people. Due to construction and car accidents on the interstates, a few of us arrived 10-15 minutes late. At 11:20 a.m., our wait was still another hour, so we decided to walk to the Corner Bakery for our conventicle.
Based on the definition, you may wonder why the event was named what it was named. It is because in the books, there are species other than humans that have to remain inconspicuous as not to draw attention to themselves . . . witches, daemons, and vampires, and they have their own government, which is a conventicle that consists of three witches, three daemons, and three vampires. So, essentially, we were giving the event a name that tied back to the books. 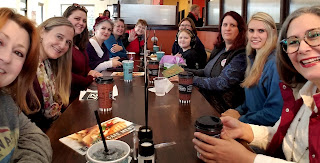 It was great to meet people who love the book as much as I do, and we likely wouldn't have met each other had it not been for the books. Topics of conversation were introductions, our pets, and of course, the books and television show, which is currently being filmed. Some of us are disappointed with some of the actresses and actors that were cast and ecstatic with others because they were spot on with what we imagined. One major role that hadn't been cast was that of Marte. I mentioned that I imagined the character to look like Martha Stewart. What is interesting is the character was finally announced a few days later, and the actress resembles Martha Stewart! We enjoyed meeting each other so much that we have already scheduled our next conventicle.
Non-readers think that reading is a solitary hobby, but it really isn't. The All Souls Trilogy and the online group is bringing together people who would otherwise never have met and new friendships can blossom from it.
Has a book ever brought you into contact with other people that you otherwise wouldn't have met? If so, what book and how did you meet these people? Let us know your story in the comments.
Location: 4585 Ashford Dunwoody Rd, Dunwoody, GA 30346, USA