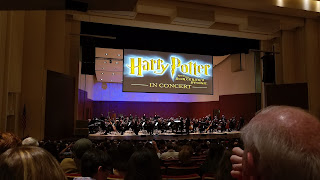 Approximately six months ago, I decided that I wanted to see the Atlanta Symphony Orchestra perform before the end of the year as I had never attended any of their performances. I began scrolling through their schedule and found out that they would be performing the score of Harry Potter and The Sorcerer's Stone while the audience watched the movie. There were three performances on the evenings of November 30, December 1, and December 2, and so, I reached out to the people I knew were die hard Harry Potter fans to see if they were interested . . . three people committed to December 2 and the tickets were purchased.


As the performance got closer, one of the girls going found out that the University of Georgia would be playing in the SEC Championship game and wanted to throw a football game watching party, and the game was to possibly interfere with our Atlanta Symphony Orchestra performance. She decided she wanted to find someone who would buy her ticket to go with us, so we threw out a couple of names of people from our book club. Neither of them were able to make it, and I ended up finding a friend that was interested in going, and to top it off, she was roommates with one of the people already going. Win Win Situation.

Two of the girls and myself decided to carpool down to the venue and eat dinner at South City Kitchen before the performance. We got there early . . . around 5:30ish. I forgot how snooty the hostesses were. One of the hostesses asked, "Do you have reservations?" After telling her no, she replied with, "I'll see if the chef can accommodate another table."

The restaurant was maybe one-third full, and it was on the tip of my tongue to tell her that if the chef couldn't handle a restaurant that wasn't too busy than he must not be a very good chef. However, I restrained myself as I didn't want to worry about them doing something to my food. Don't get me wrong; the restaurant is a relatively nice one with most of the dinners being $18 to $22, and the food is really good.

Time got away from us, and we had 30 minutes to pay our bill and get to the venue to watch the Atlanta Symphony Orchestra play the score of Harry Potter & The Sorcerer's Stone, or Harry Potter & The Philosopher's Stone as it's called in the United Kingdom. We got there with 15 minutes to spare, which allowed us to meet up with the other girl attending and use the restroom before the show started.

As we took our seats, the lights blinked and then dimmed. The conductor came out and introduced himself and proceeded to ask us to cheer for which house we belonged in as he listed them out. We had a Ravenclaw, Hufflepuff, and a Slytherin in our group. Pottermore had sorted me into Slytherin . . . boo! He encouraged us to cheer at our favorite parts of the movie or for our favorite characters. And without further ado, the credits began rolling and the music began playing.

The Atlanta Symphony Orchestra was absolutely amazing. The even played the score while the ending credits rolled, and what surprised me most was quite a few people got up and left during this time. I guess they were there to only watch the movie and didn't care about the live music at all. I thought it was quite rude myself. It was such a magical evening that I can't wait to go back and hear them play again. The next time I think I'll choose something that isn't tied into also watching a movie.

Has the symphony in your area played the score to a movie while you watched it? If so, please tell us about your experience in the comments. And, don't forget to follow us on Facebook & Instagram.