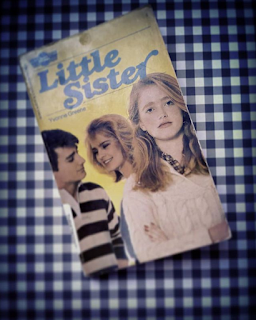 Growing up, there was a teen romance book series called Sweet Dreams that Bantam Books published. Each book was a stand alone book (for the most part) with different characters and were written by a variety of different authors. These teen romance books are hit and miss with character development and plot, especially when it comes to the earlier books in the series.

However, the book series wasn't readily available in my local bookstores. It seemed that the only place I could actually find them easily were the school book fairs, which was frustrating to me as a kid.

Although the internet was around, online shopping hadn't made it big yet, so that wasn't really an option at the time. As an adult, I decided to track down some of these books online, order them, and read them. I came across a copy of Little Sister (Sweet Dreams, #5) by Yvonne Greene on ThriftBooks.com and decided to buy it.

Little Sister (Sweet Dreams, #5) opens with Cindy waking up on the day of her sixteenth birthday and reflecting on how she had wanted a huge "Sweet Sixteen" birthday bash when she was little, but now that the day had come, she didn't want one because nothing could compare to the party her older sister Christine threw when she had turned sixteen the year before. From there, Cindy reflects on how her older sister is the favorite child and much more beautiful and developed then she is.

We find out that Cindy has a huge crush on senior Ron, a former basketball player turned actor, and he just happens to sit behind Cindy during study hall. Cindy's dream comes true when Ron asks her out on a date. However, the romance turns sour when Christine lands the lead in the school play of Romeo and Juliet  . . . opposite of Ron, and the two start spending a lot of time together. This leads to Cindy thinking Ron is cheating on her with her own sister!

My initial thoughts are that this was a super cute read, but it didn't have a lot of plot or character development with the exception of the main character . . . Cindy. Cindy is like a lot of teenagers as she is very self involved and seems to only care about her problems. She completely ignores her friend Helen when she's trying to tell Cindy about her own breakup. On top of that, when Helen wants to go into a store where her crush works, Cindy refuses to go in with her because she is so caught up with her relationship with Ron.

I don't have any siblings, so I don't know if the relationship between Cindy and Christine is normal, but Cindy is the younger sister and resents having an older sister. She is extremely jealous of Christine as well and is constantly picking fights with her. It seems to me that she has the mentality of someone in middle school instead of high school.

All in all, I enjoyed the book and felt like it had a good lesson for kids . . . don't jump to conclusions and things are not always what they seem. For this reason, I gave Little Sister (Sweet Dreams, #5) by Yvonne Greene 4 out 5 stars.