All Souls Trilogy Coming to Television 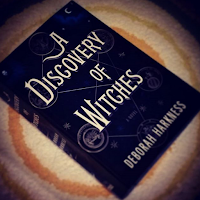 The three books that make up the All Souls Trilogy (A Discovery of Witches, Shadow of Night, and The Book of Life) became one of my all time favorite trilogies when I discovered the first book several years ago and devoured it. Then, one of the book clubs I belong to enjoyed the trilogy so much that we created a private Pintrest board where we posted photos of actors and actresses that we envisioned played the characters should it become a movie or television show.

When it was announced that the All Souls Trilogy was being turned into a television show, I was ecstatic. Sky One and Bad Wolf began casting the show, and I couldn't wait to see who they chose to play the characters. I am disappointed in some of the people who were chosen, but I trust that who the casting directors chose will bring the books to life.

It has yet to be announced where the series will air in the United States, and everyone that loves the books have been anxiously awaiting for an announcement . . . and not very patiently. Deborah Harkness recently posted on Facebook that a big announcement would be made at Comic Con in San Diego, California (Thursday, July 12, 2018 through Saturday, July 14, 2018). I am hoping and praying they'll announce where it will air in the U.S.

Update:  Two streaming services, Sundance Now (not to be confused with the Sundance Channel) and Shudder, will drop all eight episodes of the first season on January 17, 2019.

Meet the major characters and the actors and actresses portraying them.

Diana Bishop is the last descendant of the Bishop & Proctor families from the Salem Witch Trials of 1692. I had imagined someone who looked like Reese Witherspoon as I read the book. Teresa Palmer snagged the coveted role, and since she has a similar look to Witherspoon, I am happy with this casting choice.

Matthew Clairmont is a centuries old vampire that comes from a very powerful family. I pictured someone like Paul Wesley or Ian Somerhalder (or even someone like Theo James) in this role, but instead directors chose Matthew Goode. I am disappointed in this choice as he seems too nerdy (for lack of a better word) and not foreboding enough to pull this role off, but I am hoping to be pleasantly surprised.

Peter Knox is a witch and member of the congregation that is up to no good. Casting directors chose Owen Teale for this role, and he looks exactly how I imagined Peter Knox to look, so I am ecstatic with their choice.

Gillian Chamberlain is a witch who was in cahoots with Peter Knox. The casting directors made another excellent choice in casting Louise Brealey who looks exactly how I imagined Gillian would look.

Emily Mather is Sarah Bishop's significant other and a witch. Valarie Pettiford will portray Emily, and I think she is way too pretty for this role. I had imagined someone much nerdier looking.

Ysabeau de Clermont is a vampire and the one who turned Matthew into a vampire making her the mother of Matthew. She is described as looking younger than Matthew and Diana, but I always pictured someone like Catherine Zeta-Jones because the roles she plays are typically fiery characters. Instead, Lindsay Duncan will be stepping into this role, and I hope I am pleasantly surprised.

Marte is the housekeeper at Sept-Tours, the castle that Ysabeau lives in. I pictured someone that looked like Martha Stewart while reading A Discovery of Witches and was happy with the casting of Sorcha Cusack who looks similar to Stewart.

Miriam Shepard is Matthew's colleague at Oxford. Aiysha Hart portrays Miriam, and I think she could be a good fit for this role.

Marcus Whitmore is a vampire turned by Matthew. Played by Edward Bluemel, he fits the description of Marcus perfectly in my opinion.

While we wait for the television series to air, check out the first official trailer from Sky One. Enjoy!