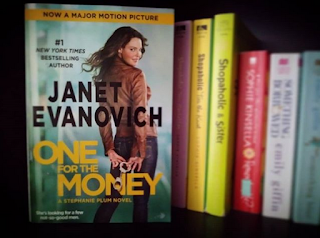 Something I never realized was that once a year, each state apparently has a national day. In this case, "National New Jersey Day" is July 27. You didn't know this either? That's because it just came into existence in 2017 when National Day Calendar created the holiday.

This new holiday celebrates the day New Jersey signed and ratified the Constitution and Bill of Rights. The year was 1787 and made New Jersey the third state of the new nation called the United states of America.

National New Jersey Day shouldn't be confused with New Jersey Day. In 1664, on June 24, the state of New Jersey came into existence . . . at least appearing on paper for the first time ever. New Jersey Day celebrates the day it was officially created by the Duke of York making it an English Colony.

In honor of National New Jersey Day, I thought I'd share my favorite book series with you that is based out of the Garden State.

Janet Evanovich writes many different books and series, but the series I am currently reading, very slowly I might add, by her is her Stephanie Plum series, which is based in Trenton, New Jersey. Based on her descriptions of some of the characters, I definitely picture people from the television show Jersey Shore, even though I know people from New Jersey that look nothing like the people on the show.

The first book in the Stephanie Plum series is One for the Money (Stephanie Plum, #1). At first, I wasn't sure if I actually was going to like the series or not, so I wanted to be fair and read the next two or three books. And, I fell in love with the series! Since I have waited so long to read the series, I have been able to stock up on most of the books by buying them very cheaply through the semi annual public library sale in my county. With the rate I am reading the series (because I am reading other books in between), I'll be able to purchase the last couple books in the series from the public library sale as well. It's a win win situation. I get to read cheaply and keep the books, and the library gets to make some money.

Have you read the series? If so, what do you think of it? On another note, what is your favorite book set in the Garden State?