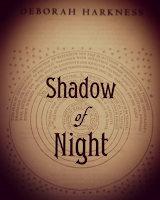 Starting where A Discovery of Witches left off, in Shadow of Night (All Souls Trilogy #2) Diana and Matthew have traveled back in time to London in the year 1590 to search for the mysterious Ashmole 782 AND find someone who can tutor Diana in the art of witchcraft.

The opening quote that Deborah Harkness chose couldn't be more perfect as it sets the tone and theme of Shadow of Night. Throughout the novel, the reader learns a multitude of things about Matthew and the regrets he has about his past . . . things he would change if it wouldn't cause dire consequences to the future.

The past cannot be cured.
- Elizabeth 1, Queen of England

There is a plethora of historical people who make an appearance in Shadow of Night, which enhances the reading experience and made me want to learn so much more about history. Historical people who are characters in this installment include, but are not limited to, Christopher Marlowe, George Chapman, Thomas Harriot, Henry Percy, Sir Walter Raleigh, and Mary Sidney. I can't wait to learn more about them!

We also meet Philippe De Clermont, Matthew's father. At first, I couldn't stand Philippe, but as I read on, I began to like him. I'm not sure at what point that I changed my mind, and at a point, I was crying my eyes out because of him. We also meet Diana's father, Stephen Proctor, who isn't as well developed as Philippe, but the pages that contain him are so bittersweet.


After reading Shadow of Night for the second time, I realized that there were a ton of things I missed the first time I read it. I won't reveal exactly what those things are as to not spoil anything for those of you who have yet to read this fantastic novel. I also enjoyed the book a lot more than I did with my first read through. Throughout all of the books in the All Souls Trilogy, readers find a lot of Easter Eggs . . . bits of information that allude to something bigger that will happen.

If books about vampires, witches, and daemons aren't normally your cup of tea, Shadow of Night will change your mind. Part romance, historical fiction, and fantasy, it casts a spell on readers, making it hard to put down.