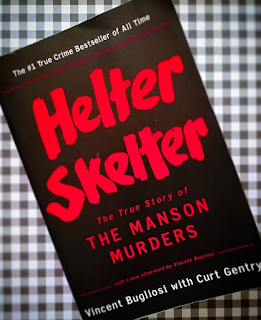 Los Angeles, 1969:  During the summer, a series of random, brutal murders make headlines across the United States. The murders include actress Sharon Tate and her unborn child, Jay Sebring, Wojciech Frykowski, and Abigail Folger. Eventually, a trail of circumstances led to Charles Manson and his followers living with him in the desert.

When I was in middle school or high school, there was a news documentary about Charles Manson that came on television . . . I want to say it was an episode of the television show 60 Minutes, but I could very well be wrong. This of course spurred a discussion in my history class. Up until this point, I had learned very little about Manson and his "family" at school, and it piqued my interest. I knew that there was a book that had been written about the murders called Helter Skelter, and I wanted to read it. It wasn't until I started my own book club that focused on books that were in the thriller, horror, and suspense categories that I actually decided to pick up and read Helter Skelter:  The True Story of The Manson Murders as it was one of our book club picks.

One of the most interesting things I learned was that Dennis Wilson, the drummer for the Beach Boys, became friends with Charles Manson. This came about when Wilson picked up two women, who were hitchhiking, and drove them to their destination. He came across the same two girls  hitchhiking again and drove them to a different place. Manson was standing at the end of the driveway, and this is how the two men met. What is even more interesting is that Manson helped Wilson write a song that appeared on one of The Beach Boys' albums. However, Manson wasn't given any credit on the song. The friendship was eventually ended by Wilson after seeing violent tendencies in Manson.

Helter Skelter:  The True Story of The Manson Murders definitely gave some good insight into Charles Manson's childhood, and it was a very sad, screwed up childhood. He did spend a lot of time in and out of jail, and I wonder how no one saw any signs of what he was actually capable of doing. But, then again, he easily manipulated and brainwashed all of those people to do all of that killing for him.

Before I started reading the book, I had no idea that the author, Vincent Bugliosi, was the prosecuting attorney against Charles Manson. It definitely gave a unique insight to the trial that I don't think we would've gotten from anyone else. Sadly, Bugliosi passed away in June 2015 . . . just a little under 2.5 years before Manson passed away.

The book was extremely well written and kept my interest for the most part . . . there were a few times that it felt like it got a little to bogged down. Overall, a very interesting read, and definitely deserved to win the Edgar Award from the Mystery Writers of America for Best True Crime Book of the Year. I give Helter Skelter:  The True Story of The Manson Murders four out of five stars.