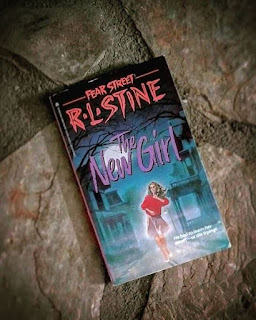 The New Girl (Fear Street, #1) by R.L. Stine starts out with Cory Brooks clowning around in the cafeteria and noticing the new girl Anna Corwin. She's ethereal with her blue eyes and blond hair, and her pale skin that seems almost ghostly. Cory can't get her out of his mind and starts losing sleep and ignoring his friends. As quickly as she appeared at Shadyside High School, she disappears just as fast. Feeding his obsession with Anna, Cory goes by Anna's house on Fear Street despite the horror stories of people who live there.

For whatever reason, I decided to pick up my copy of R.L. Stine's The New Girl, which is the first book he wrote in the Fear Street series and was originally published in 1989. Even though this was the first book in the series, it was one of the ones I read later on in high school. I don't remember exactly how I first came across his books, but I fell in love with them around the time I was thirteen.

As I was rereading The New Girl, there was so much that I remembered as I worked my way through the book. I even remembered that it wasn't one of my favorites. As I finished the book, I remembered I hated the ending the first time around, and I have to say that I hated it as an adult too. I can't really say much about why I hated it because it really would give away the whole storyline, but I was disappointed by it. That's not to say it's a bad book or poorly written because it's not. I just didn't connect to it like I did with some of his other works.

What the book did deliver on is the total creep factor, and it would be the perfect book to read during a thunderstorm, which is something I relished as teen. As a first book in the series, I think it was done well. This book is great for tweens and teens between the ages of eleven and seventeen. I gave The New Girl (Fear Street, #1) by R.L. Stine four out of five stars.