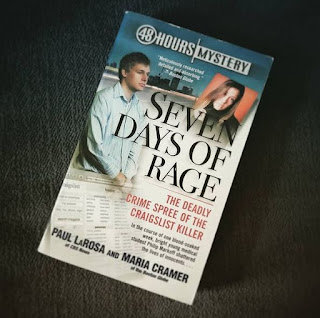 April 2009, I flew into Boston Logan International Airport in Boston, Massachusetts and checked into my hotel in Back Bay, where I would be staying over Easter weekend. During my stay, I was awoken one night in the wee hours by police cars, fire trucks, and ambulances speeding down the road with their lights and sirens on. I finally fell back asleep and didn't think too much of all the commotion during my trip.

Several days after returning home, the local news aired a story detailing crimes that took place in Boston and Rhode Island, and Philip Markoff was arrested for them. When I heard this, I instantly knew that all that commotion that woke me up had to be tied to this news story, and it gave me chills. Any time I heard an update on Markoff, who was dubbed The Craigslist Killer, I was glued to the television, and of course, I watched the 48 Hours Mystery episode of these crimes. Then, news coverage began to diminish, and I didn't quite have the need to know all the nitty gritty details.

A couple years later, I learned of the book Seven Days of Rage:  The Deadly Crime Spree of the Craigslist Killer by Paul LaRosa and Cramer, I knew I had to read it. And, I was instantly sucked into the storyline and finished the book within two days because it read like a book of fiction. It was well researched, and I'm in awe of all the details that were included like the room number where Julissa Brisman was murdered in at the Copley Marriott.

I also enjoyed seeing the photos included in the book, especially the ones that showed the Westin Copley Place hotel, where Trisha Leffler was robbed, and the Copley Marriott where Julissa Brisman was murdered. I was worried that they would show the actual crime scenes, but they did not, and I was relieved by that.

What disappointed me about Seven Days of Rage:  The Deadly Crime Spree of the Craigslist Killer was that it ended with the case would be going to trial. However, by the time I read the book, Markoff had already committed suicide and the charges against him were dropped by the prosecutors. With that being said, it would have been nice to have this information included in the book. All in all, I gave this true crime novel three out of five stars.

If you liked Seven Days of Rage:  The Deadly Crime Spree of the Craigslist Killer by Paul LaRosa and Maria Cramer, you may like Helter Skelter:  The True Story of The Manson Murders by Vincent Bugliosi with Curt Gentry.