One of the books I chose to read as part of my rereading my way through my childhood is Sunset Island (Sunset Island, #1) by Cherie Bennett. As a first book in the series, it features teens at an au pair convention looking for work across the United States, and we meet three friends who get assignments on the wonderful Sunset Island in Maine . . . Emma Cresswell, Samantha "Sam" Bridges, and Carolyn "Carrie" Alden. 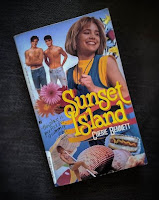 What I love about the Sunset Island book series is that it deals with a lot of issues that tweens and teens deal with and how sometimes it is blown out of proportion (and sometimes not). In the first edition of Sunset Island, it deals with secrets being kept . . . Emma Cresswell doesn't tell her friends Sam and Carrie and her boyfriend Kurt that she comes from a wealthy family because all she wants to do is fit in with everyone and try to find out who she is without her family's money. When she finally decides to tell her friends, they make some harsh judgements about wealthy people, and Emma chickens out of telling them about her true self.

Who hasn't kept a secret from someone? It could be big or small, but I think most people don't reveal everything about themselves, especially when they first meet someone. So, I definitely find this part of the book very believable. What I didn't find believable, even as a teenager, was that people would think that someone not mentioning their wealth was lying to people. Why would someone not mentioning something about themselves be a lie? There are just some things that are not anyone's business.

With that being said, it was an engaging read as a teenager, and I still found it interesting as an adult. I would give this book four out of five stars.