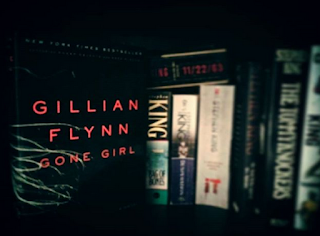 After reading the last few words of the novel, I set it face down on the bed beside me and asked, "Did that really just end like that?"

Never in my life has a book made me as angry as Gillian Flynn's Gone Girl. So much so that after finishing it, I had to sit there for a minute thinking about what I had just read before picking it back up off the bed and throwing across the room.

Of course, after throwing it across the room, I jumped off the bed to pick it up the floor . . . worried that I had damaged the book. Yes, I know you're probably thinking I'm neurotic, but I like to keep the books I buy looking nice.

Gone Girl as a whole didn't make me angry . . . just the ending. I hated the fact that Nick decided to stay with Amy after all she put him through but understand his need to protect.

For this reason alone, this made Nick a strong character in my mind because he was willing to go to extremes to protect the ones he loved. On the other hand, it made me so angry that he didn't have the strength to stand up to her and leave. Unlike many of the women I know who read the book, I liked the character Nick Dunne. Was he a weak man? To a certain degree . . . yes, but at least he had a few redeeming qualities.

On the other hand, I absolutely hated the character Amy Dunne. What an evil, psychotic, bitch! The lengths she went through to frame her husband is really messed up. This character had absolutely no redeeming qualities about her.

Gone Girl was well written although a bit disturbing. Alternating the points of views of the characters every other chapter was the perfect way to present the story line. This helped keep the book interesting and made it harder to put down. All anger aside, Gone Girl is a must read.

Synopsis of Gone Girl:  On the summer morning of Nick and Amy Dunne's fifth wedding anniversary, Nick Dunne arrives home to find the house trashed and Amy missing. As the cops investigate, Nick finds himself as the key suspect in his wife's disappearance and isn't helping himself when it comes to being questioned. If he didn't do it, then who did? Gillian Flynn weaves an extremely disturbing story in Gone Girl.