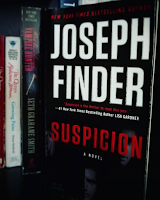 Joseph Finder's Suspicion is a fast paced thriller based in Boston, Massachusetts where a struggling author's life seems to be falling apart. Danny's ex-wife has passed away, and his daughter's private school tuition is past due. No thanks to a fellow parent's generosity of loaning him a large sum of money via a wire transfer, the DEA takes a sudden interest in Danny.

Holy plot twists, Batman! Suspicion had one plot twist after another that made it hard to put down. However, some of them were a bit predictable, but it really didn't detract from the story line or the writing.

The only real flaw I saw with the book is that it is doubtful a person would accept a personal loan from another person they've never met before . . . even if it was the father of their child's best friend. It would make more sense if there was some sort of scholarship fund that was available, but then, Finder wouldn't have had that connection he needed between Danny and Tom to make the rest of the book actually work.

If I didn't have to work the next day, I would've stayed up all night long to finish the book. I think Suspicion would translate well to the movie format and hope it becomes a reality one day.