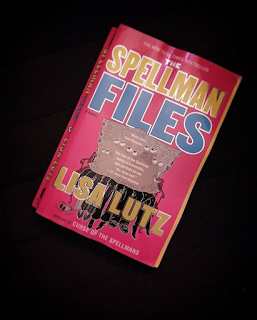 After joining the Goodreads.com website to keep track of what books I was reading and which ones I wanted to read, I discovered their giveaways section where members of the site can win free books from publishers. I entered numerous giveaways hoping I'd win just one book and didn't think of much more of it.

Then, during one of my many trips to Barnes & Noble, I was looking at the books on the bargain bin shelves hoping to discover my next favorite author. Because who has just one favorite author, right? While browsing, I picked up The Spellman Files by Lisa Lutz.  The main character was described as part Nancy Drew, part Dirty Harry. I decided to buy the book since it was on sale for $4.98. I promptly went home, put the book on one of my book shelves, and promptly forgot about it.

Approximately a month or two later, I received an email from Goodreads.com letting me know that I had won Curse of the Spellmans by Lisa Lutz, which was the sequel to The Spellman Files. Since I am the type of person who won't read a series out of order, I had to find my bargain bin copy of The Spellman Files on one of my overcrowded bookshelves.

The Spellman Files is not your typical mystery book. It is a humorous, mystery about a family of private investigators that is quite dysfunctional and knows no boundaries. Isabel's parents, Olivia and Albert, have no problem with tailing her car or even bugging her apartment. Not to mention, Olivia has an obsession with trying to fix Isabel up on dates, especially on dates with lawyers.  David, Isabel's older brother and the perfect child, wanted nothing more to do with the family private investigation company after a point and became a lawyer to get away from it. He does however send some business to his family but is bad about getting them payment in a timely matter. The youngest Spellman, Rae, has almost no social life and is obsessed with tailing people and eating sugary foods every meal. Then, there is Uncle Ray, a former cop who loves to gamble and will side with whichever family member that can give him something he needs . . . money.

There are a couple of different mysteries that happen within the family . . . Uncle Ray's lost weekends and another involving Isabel's younger sister named Rae, which I can't really go into without giving away the ending.  The other mystery has to do with a missing persons case that Isabel is working.

I don't think I've ever laughed so hard while reading a book or read one so fast. I finished the book it 3 days. Some of the people in the Thrilled by Books book club feel like it is similar to Janet Evanovich's Stephanie Plum books.  I haven't read any of Evanovich's books, so I couldn't tell you if The Spellman Files is that similar or not.

One of the things I loved about the book was that there were footnotes, which I don't normally enjoy, but it was information that the author felt was pertinent but didn't necessarily work well with the rest of the book. I'd give the book four stars out of five.