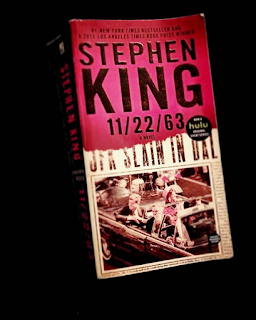 Who hasn't thought about time travel . . . of going back into time or into the future. With so many books, and movies, on this subject matter, you'd think the subject of time travel would be overdone and predictable. But, Stephen King is anything but predictable and hit the nail on the head with his novel 11/22/63.

Does the date sound familiar to you? It should, but if you've lived under a rock the past fifty plus years, I'll go ahead and refresh your memory. President John F. Kennedy was assassinated on this particular date in history leaving much of America in bewilderment and shock.

In 1971, Stephen King wanted to explore a concept for a novel where a character went back into time to stop the assassination of JFK and the aftermath. However, he felt like he didn't have the time to properly research the subject matter and that it was too close to the actual event to do it justice, so he put it on the back burner. All I can say is that I am extremely happy that he came back to his concept and actually wrote and published 11/22/63.

When it first came out, my mom and I were super excited to read it. My mom read it first because I was in the middle of a book already. When she finished, she kept asking if I was ever going to read it, but I kept putting it off. Then, Hulu announced that the mini-series coming out, which got me to finally pick up the book up and read it.

Unlike most of King's novels, 11/22/63 is not a horror book but more of a sci-fi or fantasy novel that has a bit of everything in it including romance, surprisingly. I'm actually at a loss of words to tell you how amazing, magical, and suspenseful this book is.

There aren't many books that make me want to call in sick to work, but this was one of them. Unfortunately, I'm responsible and didn't call in sick. From page one, I was sucked in and couldn't wait to find out if the main character, Jake Epping, stopped the assassination of JFK. The writing was so well done that I actually felt like I was there with Jake.

So many of the books I've read recently have had such horrible characters all the way around that I really didn't care what happened to them, but this isn't the case with 11/22/63. I really cared about the characters and ended up crying at the end of the book, but they were happy tears.

If you read no other book by Stephen King, then you must read 11/22/63. Run, don't walk to your nearest bookstore (or computer) to purchase it. I give it five out five stars.

In the midst of getting a divorce, high school teacher Jake Epping is enlisted by local diner owner and friend Al to go back in time to the year 1963 to stop the assassination of John F. Kennedy.

In disbelief, Epping follows Al's instructions on how to find the rabbit hole to actually accomplish the task and finds himself in the past, creating a new life, and making mistakes as he goes.