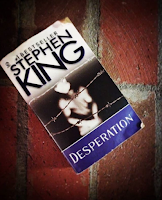 Have you ever found a book so depressing that it took you over four years to read? Desperation by Stephen King was that book for me. Don't get me wrong . . . it was very well written but depressing beyond on belief, so I kept putting it aside to read other novels.

At one point, I was making so much progress that I really wanted to finish it despite it being so depressing, so I kept pushing through. Then, the nightmares began . . . every night for a week. I guess having multiple nightmares attests to how well written it is. As a side note, I've been a huge fan of horror movies since elementary school. Poltergeist, Halloween, and Nightmare on Elm Street were popular choices for me, and not one time did I ever have a nightmare.

I'm not sure I can say there any redeeming qualities about the plot . . . a few lessons learned and a semi happy ending, but that's about it. King wrote a sequel, The Regulators, under his pen name Richard Bachman, but if it is as depressing as this book, I'm not sure I want to read it.

Have I mentioned how depressing Desperation is? I have?! Okay, let's move on. I wouldn't recommend it to anyone despite giving it a rating of three out of five stars.

Synopsis of Desperation by Stephen King

Desperation, Nevada. If you travel Interstate 50, you'll come to the loneliest city . . . Desperation. Move right along or you might just die trying to get out. An ancient evil is unleashed upon the town of Desperation that overtakes the bodies of the city's citizens . . . one person at a time.