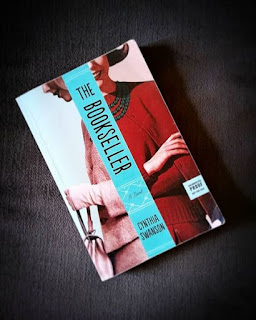 Let me begin by being upfront . . . I won an Advanced Reading Copy (ARC) of The Bookseller by Cynthia Swanson in Goodreads.com's First Reads Giveaway in exchange for my honest review of the book.

Third time is a charm, right? It took me THREE tries to actually read Cynthia Swanson's The Bookseller, but on that third try, it sucked me in, and I couldn't put the book down. Fair warning, there are some minor spoilers below.

Autism is a minor theme throughout the book. The way the characters handled and reacted to autistic kids took me by surprise and saddened me. No one seemed how to interact with these kids. What's even more surprising is the doctor said that autism is caused by mothers who don't show their babies enough love and don't hold them enough. I surely hope this wasn't really the way doctors thought in the 1960's.

Another interesting point in The Bookseller is Kitty and Freida couldn't get a loan from the bank to open their bookstore. They had to borrow money from Freida's father. Were single women really unable to take out a loan in the sixties? If so, it makes me that more thankful to live in a day and age where this wouldn't be an issue.

Racism was another theme presented in Kitty's dream sequence where Katharyn & Lars have "colored help". It was reminiscent of Katherine Stockett's The Help, which made me mad because I wanted these scenes to be more original, not feel like I was reading an excerpt of another book.

Not so surprising was when the author revealed that Freida was a lesbian. There was a ton of foreshadowing.

All in all, I enjoyed The Bookseller and would definitely recommend it to other people. It was an entertaining, easy read . . . a beach read if you will. I give it three out of 5 stars.

Synopsis of The Bookseller by Cynthia Swanson

Denver, 1962.  Unmarried friends Kitty Miller and Freida own & run a bookstore in Downtown Denver. Following Kitty's life as a single, working woman in the a1960's, she places a personal ad in the local newspaper to meet "Mr. Right" and gives her cast offs to Freida.

Then, the dreams begin . . . Katharyn Andersson is married to the perfect man, Lars, and they have three children. To Katharyn, it's the perfect life, the one she longs for. Each time she dreams, the more real it is.

As her worlds begin to blur, Kitty doesn't know which one is reality and which one is imagined. Which one will she choose?