Book Review: The Woman in Cabin 10 by Ruth Ware

The Woman in Cabin 10 has been compared to Gone Girl and The Girl on the Train by many, so there was some hesitation on my part about reading it at first but the pull of it being reminiscent of Agatha Christie was greater. After reading a synopsis of the novel, I desperately wanted an Advanced Readers Copy but that wasn't in the cards for me.

When it was released to the general public, I purchased The Woman in Cabin 10 from Barnes & Noble with the intent of reading it while on my first cruise. However, I had second thoughts figuring it probably wouldn't be such a good idea for me to read a thriller taking place on a cruise ship while I was actually on a cruise. So, I put off reading the book, and boy, was I ever glad I did so because I would have been paranoid and imagining things the entire time.

This was the first novel I've read that was written by Ruth Ware and actually had never heard of her before. It kept me guessing to the very end and did not disappoint. I definitely enjoyed it way more then Gone Girl and The Girl on the Train, and I'm not really sure why it was compared to them.

One of my first thoughts after finishing the book was that I wanted to read the whole thing again followed quickly by the thought it could have been a modern day Agatha Christie novel. I'd compare it to Christie's Murder on the Orient Express or Evil Under the Sun. I give it four stars out of five. 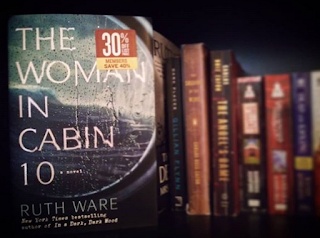 Synopsis of The Woman in Cabin 10 by Ruth Ware

The majority of the novel is spent by Blacklock trying to convince people that she wasn't crazy . . . that there really was someone staying in the cabin next to her who went overboard while trying to find out what happened.