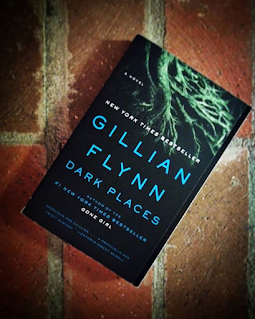 Have you ever read a book and had a moment of déjà vu? A moment where you thought you've read it before? While reading Dark Places by Gillian Flynn, I had several of those moments and kept racking my brain of what book I had read that could possibly be similar to Dark Places in any way, shape, or form. And, I came up with Truman Capote's true crime book, In Cold Blood that I started reading but never finished.

Both books, Dark Places and In Cold Blood, take place in Kansas where a family, or a few members of a family, were murdered in their home. Coincidentally, or maybe not, both of these homes happened to be on a farm. That's really where the similarities end, but it was enough to make me feel like the basis of Dark Places was taken from Capote's book.

Dark Places begins in the present day and introduces us to the main character, Libby Day. I find her to be passive, unmotivated, and continuously blaming others & her past for not being able to keep a job. Libby is outraged when a young woman goes missing and is the big headline in the news because it takes attention away from what happened to her as a child and now won't be able to capitalize on it. I wanted to shake Libby and tell her it's time for her to get her life together . . . go to therapy, take medication for her depression, get a stable job, etc. I really wanted to like her but really had a difficult time with it. There were other characters that were unlikable as well, but I felt like Libby could actually get her life together if she really wanted to.

What did I enjoy about the book? I enjoyed that the chapters switched back and forth between the present day and the past; I don't think it could've really been written any other way as it would have been anti-climatic. The descriptions of the locations and the characters were brought alive, and I could really picture everything in my mind as if I was watching a movie.

One of the things I absolutely hated about the book was the mutilation of the animals. As an animal lover, I just can't stand to read, or watch movies, about these types of things. I know it was vital to the plot of the story, but I wish it had been glossed over more instead of so detailed. It made me want to cry . . . yes, I know that makes her a good writer.

When I started reading Dark Places, I knew it was being turned into a movie but had no idea the movie had already been made. I am a bit leery of the movie because it doesn't have a spectacular cast, and there really was no fanfare around it like there was when Gone Girl was made into a movie. With that being said, I'll probably watch Dark Places eventually just so I can compare it to the book. Overall, I'd give Dark Places three stars out of five stars.

Kinnakee, Kansas - 1985. Seven year old Libby Day's mother and sisters are brutally murdered. The oldest child of the Day family is accused of the crime, and Libby's testimony against her brother Ben leads to a guilty conviction.  Fast forward to the present day . . . a secret society contacts Libby to speak to their group about the murders of her family and are willing to pay her to help prove Ben's innocence. Now unsure if her brother actually committed the crime, she searches for the truth of what actually happened that day in 1985.