Book Review: A Game of Thrones (A Song of Ice and Fire, #1) by George R.R. Martin 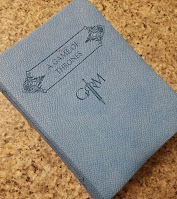 One of the book clubs I belonged to decided to read the A Song of Ice and Fire series. I rushed out and bought all four books because Barnes & Noble was selling them in a bundle for $20.00, plus tax. Not too long after, the fifth book in the series came out.
Not realizing how long they were, I waited until a week before we were to meet to crack the book open. Since there was no way I was going to come even close to finishing, I waited to read it and started on another book.

With the next book club still a month away, I thought I could push through both the first book and the second book in the series. That is until I looked at the second book and saw it too was super long. I finally decided not to read the series with the book club and would wait a couple of years to read them because I knew I'd forget the discussions of who had died.

What can I say about the first book but WOW. Even though it's over 800 pages, super descriptive, and has a ton of characters, it's easy to get through somewhat quickly if you don't have any other book obligations at the time. I was sucked in from the first chapter and felt like I was actually there in Winterfell, Kings Landing, and the other places in Westeros.

I don't read a lot of fantasy novels, so I can't really compare George R.R. Martin's writing to any other well known authors in the genre. Regardless of the genre, Martin is an amazing writer . . . period. It takes a lot of talent to make the real world stop around you and make you feel like you're in another place. It also reads more like historical fiction rather than fantasy.

With most books, I find that you really love it or hate it, but this isn't the case here. I don't think I've met one person who has hated A Game of Thrones, man or woman. Unlike Gone Girl by Gillian Flynn, there are a lot of likable characters in A Game of Thrones. My favorite characters are Jon Snow, Tyrion Lannister, & Eddard Stark. Without giving anything away, I've been told not to get attached to any of the characters because a ton of them die throughout the series, so fingers crossed on these characters.

If you don't like a lot of violence, sex, or incest, then A Song of Ice and Fire series may not be for you because the first book has a lot of these things in it, and I'm sure the rest of the series will too. Because it had so much of this heavy material in it, I'm taking a break to read some other books before reading the next book in the series, A Clash of Kings.

I'll leave you with one of my favorite quotes that is well known to everyone, even those who haven't read the book or watched the HBO series . . .