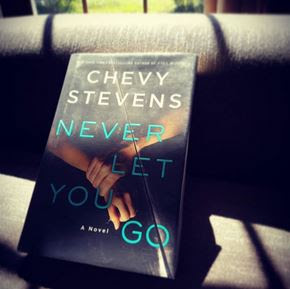 Never Let You Go by Chevy Stevens is about Lindsey young mother who is in an abusive marriage, both verbally and physically, and decides to sneak out one night with her daughter Sophie and leave her husband Andrew. Fast forward eleven years, her now ex-husband is released from prison. Constantly looking over her shoulder, Lindsey is convinced that she is being watched. Her boyfriend is attacked, and her house is broken into. Is her ex-husband doing all of this or is there someone else out there seeking revenge?

I randomly picked up this book at the library and checked it out last weekend knowing that I really didn't have time to read it. However, it kept calling to me so I ignored all the other book related commitments I'd made and began reading Never Let You Go this past Wednesday.

At first, the book was engrossing . . . I just couldn't put it down and really wanted to take time off of work so I could read it but that just isn't an option for me. Approximately halfway through, it started to drag a bit, and I kept thinking I wanted the author to hurry up and get on with it.

I was a bit disappointed with the ending as it was a bit anti-climatic for me. I wanted there to be more of a twist.Even though there were a couple of red herrings, it wasn't really a huge surprise to who was doing all these things to Lindsey and Sophie. Don't get me wrong, I still really enjoyed it and would definitely recommend it. 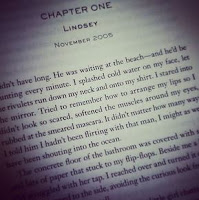 Things that I found interesting was at one point the daughter was drawing a picture of herself with her dad in a boat with the forest and animals around them. The way it was described reminded me of a scene out of the movie The Little Mermaid when Eric and Ariel were in a boat together while the song Kiss the Girl played. I know that Chevy Stevens has a daughter that is 4 or 5 years old, so I wondered if they had been watching that movie at one point when she was writing this book.

On page 141, I'm pretty sure there is a typo. One of the characters is crushing up sleeping pills to put in the whiskey. It is mentioned that it was stirred "until there wasn't a trace of power". I'm pretty sure that it should have said powder instead of power. I know that is an easy thing to miss, but it really annoyed me.

All in all, I enjoyed Never Let You Go, and I will read more books by Chevy Stevens. Those who may have been in abusive relationships or know people who have been in them may want to steer clear of the book because it just might hit too close to home for them.

Have you read Never Let You Go by Chevy Stevens? If so, we'd love to hear what you thought about it in the comments.