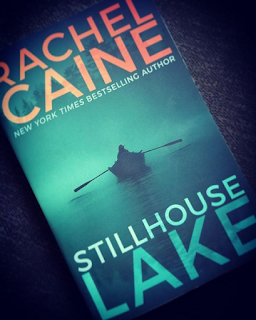 After Gina Royal picks her children, Brady and Lily, from their Wichita, Kansas school, they come home to an unknown SUV that has crashed into their garage and police swarming their yard. Fast forward to four years later, and Gina, Brady, & Lily are on the run with new identities.

Stillhouse Lake written by Rachel Caine kept me interested from the get go. There were very few slow moments on top of it. It was a quick, easy read that felt like the author wrote it with the possibility of it being turned into a movie, and it definitely was written with the typical thriller formula. This is why I gave it 4 out of 5 stars.

The ending in wrapped up for the most part with the exception of one cliff hanger, which in my opinion isn't really much of a cliff hanger. From what I've read on Goodreads.com, many people are complaining about the "cliff hanger" and refusing to read the next book in the series because everything wasn't wrapped up in a nice little bow. I'm sorry, but real life has cliff hangers where you have to wait to find out what is going to happen. Those readers feel like it isn't a stand alone book, but I feel like it could definitely be a stand alone book. And, god forbid that someone actually has to use their imagination!

As far as the suspects go, there were three men in Gina's life, not including her husband, that were penned to be a bad guy. The first man is Javier, who is helping Gina get a gun carry permit. I liked him from the get go and felt like he was a safe person, but at the same time, I thought he would turn out to be a bad guy.

Sam Cade is the next man in Gina's life we meet, and he is a new neighbor. Sam is renting the cabin on a short term lease as he is writing a book. This immediately made me suspicious of him, especially when he starts becoming super friendly with Gina. Although, I thought the author did this to the reader off track and that Sam would end up being a good guy. At one point, I started to think that he might be Gina's contact, Absalom, who helps them change identities every time they move. As a side note, isn't there a Dashiell Hammett novel with a character of the same name as this man?

The third man enters Gina's life is another neighbor, Lancel Graham, who just happens to be a cop. I immediately was suspicious of him. He just seemed odd and not quite right. But, again, I figured it might just be to throw my suspicion off another character.

I'll leave it up to you to read and draw your own conclusions, but as I read on and drew my own conclusions, I was partially correct with who the "bad guy" was, and it may or may not have been one of the men I mentioned.

The one piece of advice I can give you is NOT to read it when you are on a camping trip or vacationing in a cabin because it will definitely give you the heebie jeebies.