Book Review: All The Missing Girls by Megan Miranda

All the Missing Girls starts off in the present day, jumps two weeks ahead, and then starts going backwards one day at a time.  From there it goes back to present day and then three months into the future. I'm not sure how I felt about the structure of the book. I didn't particularly care for the format, but if she had told it any other way, we would have know the entire plot, with the exception of the ending, within the first half of the book. 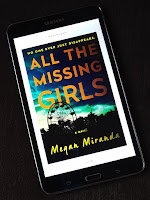 Because of the way Megan Miranda wrote the book, it started off slowly and maintained the slowness through out most of the book. It wasn't until the last third of the book that it got really interesting. At that point, I had trouble putting it down, which is the reason I gave it 3 stars out of 5.

As far as the characters go, I didn't feel like we really got to know any of them. They seemed so two dimensional. Even with them being two dimensional, I found both Daniel, Corrine, and Annaleise to be very unlikable. I had mixed emotions about Nic and Everett until the very end and ended up disliking both of them. In my opinion, the only likable character throughout was Tyler.

What was a bit disappointing was the reasoning behind and how Corrine went missing the decade before. It just seemed a bit off like there was more to the story that ended up getting edited out. Annaleise Carter was the alibi to all of the suspects in Corrine's case, and Annaleise was the second girl to go missing in the book. I expected there to be more than two girls missing, so I felt like the title was a little misleading.

I think the author was trying for this to be a psychological thriller, but it just doesn't cut the mustard for me. It was more of a romantic thriller when it is all said and done. Part of the reason I say this is there wasn't much detail into the investigation towards the end of the book and rushed into a romance. Although this novel is targeting adults, I felt like it was more geared toward high school or college age students . . . more of a mature young adult novel.

Synopsis:  Nicolette Farrell receives a phone call from her brother Daniel asking her to come home. The bills for their father's care at the nursing home are becoming too large, and they need to prepare their childhood home to sell. Back in Cooley Ridge, Nic's past comes back to haunt her when Annaleise Carter, a neighbor, goes missing, which reopens another case from a decade ago when another girl, Corrine, went missing under similar circumstances.