Has a book ever made such an impact on you while growing up that you desperately wanted a sequel? P.S. I Love You (Sweet Dreams, # 1) by Barbara Conklin was one of those books for me. I recently checked out the reviews of this particular book on Goodreads.com, and much to my surprise, a couple of people mentioned that there was a sequel.

I immediately started looking for Falling In Love Again (Sweet Dreams, # 23) by Barbara Conklin on BarnesAndNoble.com and Amazon.com as these are my go to sites for used books. Both sites said that they were temporarily out of stock, which was the second time I had received a message like this when looking for a used book, and I was starting to panic because I really wanted to know what happened. 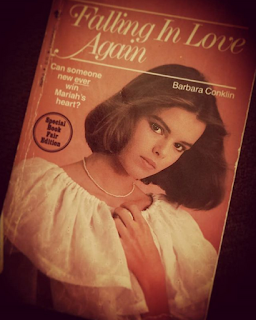 Then, I remembered I had bought a few used books from ThriftBooks.com. I searched their site, and couldn't find the book at first. I changed my search parameters and three copies were available. All three of their copies were only in acceptable condition, which disappointed me. I'm a bit picky when it comes to used books and like them to be in good condition or like new.

A few days later, I went to my mailbox, and the books I ordered had arrived. What made it even better was that I forgot I had ordered them, so it was a nice surprise. The copy of Falling In Love Again (Sweet Dreams, # 23) was a book fair edition, and I wonder what the difference is between the copy they sent me and a non-book fair edition is. It was in decent condition with only a couple of small tears at the top of a couple of pages where it had been folded over.

Falling In Love Again (Sweet Dreams, # 23) picks up a year after P.S. I Love You (Sweet Dreams, # 1) ends with Mariah and her best friend Amy in their senior year in high school. Mariah had stepped down as editor of the school newspaper after receiving the news of Paul Strobe's death. She isn't dating anyone and is still pining away over Paul. Amy decides Mariah needs to be more social and involved in school activities and signs them both up to work in the prop department for their senior school play.

Although I thoroughly enjoyed the sequel, it wasn't nearly as good as its predecessor. I guess I just loved the first one so much that a sequel could never live up to the first one. However, I thought it was better than some of the other books in the sweet dreams series because it seemed to build on the relationship between Mariah and Dan instead of waiting until the last 10-15 pages to have the girl magically snag the boy and fall in love without having much interaction. Barbara Conklin did a fantastic job of showing the emotions of losing your first love to death. It also did a great job of the characters realizing that they may not be a close to each other when they left for college because so many high school friends think they'll be best friends forever no matter what. I love that she set up that expectation for the readers.

Now that I have finished Falling In Love Again, I wish there was a couple more sequels that covered Mariah in college and then after college to see if her friendship with Amy survived those years and if her romance with Dan did as well.  Her relationship to him likely woudn't have seeing as they were at different schools and long distance relationships being really hard to maintain, especially before the internet made it much easier to stay in contact with one another.

Wondering where Barbara Conklin is now, I did a Google search for her, but the results that came up were very limited and mainly had to do with book listings on different websites. I couldn't find any biographical information on her that had any meat to it. Since P.S. I Love You and Falling In Love Again were written in the early 1980's, there probably won't be any more sequels to the books.