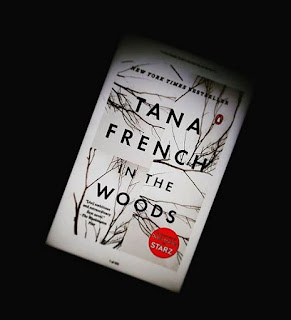 One of the book clubs I belong to decided to read In the Woods by Tana French.  It's the first book in her Dublin Murder Squad series AND her first published book. I'm not really sure what all the fuss is about the book, and I am super surprised it was an Edgar Award Winner.

To begin with, at least 100 pages could have been cut out. I have never seen a mystery book have so little happen for so many pages. On top of that, French rambled on about how the main characters, Detective Adam "Rob" Ryan and Detective Cassie Maddox, were best friends. It seems like she was forcing it a bit. The friendship seemed more like a friendship one would have in high school or college, not an adult friendship. And, of course, she had them sleep together, and she turned Rob into a total ass. He didn't want a relationship with Cassie and didn't want to blow her off, which is what he did in the end. Cassie even tried talking to him about it, and he acted like a sulky little boy and wouldn't talk with her about it. By the end of the book, Rob finally realizes how he's acted like at total ass and finally reaches out to Cassie after he hears she is engaged to Sam O'Neill, who was another detective helping them out on the case. We find out that she has deleted Rob's phone number from her cell phone.

Something that bothered me quite a bit was French kept referencing a ton of television shows and characters throughout the book, with most of the references in the first third. The majority of the references are to cop and FBI shows. It made me think that she had writer's block and was watching these shows for inspiration . . . that's how many she referenced.

At times, I felt like she was using a thesaurus just so she could throw in bigger words, and these words interrupted the flow of her writing and just didn't fit. Obviously, she never had a teacher or professor tell her not to use big words just to use them.

I am glad that I read the book, but I wouldn't really recommend it to anyone. If you must read the book, don't waste your money on it and check it out from the library or borrow a copy from a friend.

Synopsis:  Taking place in Dublin, Ireland, three children disappear into the woods in 1984. Only one is found alive . .  Rob Ryan. Fast forward to the present day. A 12-year old girl is found raped and murdered on an archeological dig in those same woods. Detective Rob Ryan and his partner are put on the case to find the killer. Is there a connection between his friends disappearing all those years ago and this murdered girl?