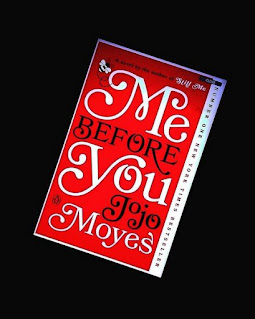 Looking at the cover of Me Before You by Jojo Moyes, my expectations weren't high going in as it had a similar look and feel to the covers of Emily Giffin books. There is also the fact that many of the people I knew that were raving about Me Before You have completely different taste in books than I do.

The journey you take with the characters is a hard one because it deals with a man, Will Traynor, who is involved in an accident and becomes a quadriplegic. He becomes depressed with his situation and has no desire to live on. Louisa Clark is brought on to be his day to day caregiver and companion by Will's parents in hopes that she will help him change his mind about assisted suicide. Louisa isn't aware of the fact that Will wishes to die until she overhears his mother talking about it with Will's sister. Louisa does some research and plans things for Will to do in hopes he will change his mind.

There are readers out there that feel like Jojo Moyes is telling people that living life as a disabled person isn't worth living, and the only way out is through assisted suicide. I just don't understand how people are coming to that conclusion, and it makes me angry. I think Moyes did a phenomenal job in showing how someone might feel having their life turned upside down in a blink of an eye, becoming depressed about it, and not having a great support system. She is in no way telling people that a disabled life isn't worth living . . . she is just showing one perspective of what someone may be going through.

“You only get one life. It's actually your duty to live it as fully as possible.”  - Jojo Moyes -

Even with the serious themes in Me Before You, I fell in love with the book. Although the ending was a bittersweet one, it is still worth the read. It gave me all the feels and put me on an emotional roller coaster that left me balling my eyes out at the end. It also left me feeling a bit depressed for a few days and gave me food for thought. I don't know how I'd deal with the situation Will was in, but I love life too much to make the ultimate decision he made. The book did remind me a little of some young adult books that I read as a teenager by an author named Lurlene McDaniel, whose books deal with characters who struggle with chronic or terminal diseases.