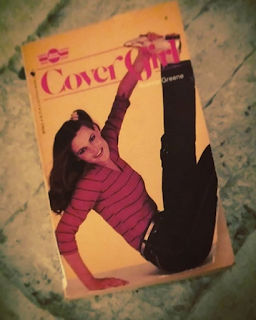 Cover Girl (Sweet Dreams, #9) by Yvonne Greene is the ninth book in the Sweet Dreams teen romance book series by Bantam Book publishers. High school junior Renee is signed on with a modeling agency in New York City and begins booking jobs as a high fashion model right away. However, she feels like she has to keep it a secret from her new boyfriend Greg because he hates girls who wear makeup and spend all their time reading the latest fashion magazines like his sister does. Once he finds out about Renee's secret life, will he be understanding or break up with her?

There is a lot that bothered me about Cover Girl (Sweet Dreams, #9). First off, Greg seems like he is very controlling, especially for a teenage boy. He doesn't like how Renee looks when she wears makeup and asks that she not wear around him. It seems more like a demand than a request. I wanted to tell the main character to run in the other direction.

The other thing that bothered me was how the modeling world was described because there were a lot of misleading information in the book. Yvonne Greene writes that the modeling agency creates Renee's comp cards or headshots straight off the photos that Renee's mother sent them. This doesn't ever happen. Models have to be photographed by one of the agency's recommended photographers, and the agency then chooses the pictures that are to be used.

Greene goes on to say that most of the jobs are after school. That rarely happens . . . most jobs are during normal working hours when it comes to print work. When it comes to actual fashion shows or working in a trade show, the hours can be very long and possibly at odd times, but if you are a student, you'll definitely miss school for a booking. With that being said, auditions and go-sees are typically after school. Lastly, Greene makes it seem like you can decide that you only want to work summers and holidays. It doesn't really work that way.

Because of the misleading information and the controlling boyfriend, I could only bring myself to give Cover Girl (Sweet Dreams, #9) two out of five stars. The controlling boyfriend and misleading information about how the modeling industry works just really rubbed me the wrong way. And, could they have had the girl on the cover of the book be in a more awkward pose? No one really poses like that!On a side note, does anyone else think the girl on the cover looks like a very young Jennifer Garner?