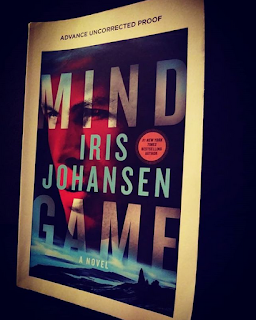 If you haven't checked out Goodreads.com, what have you been waiting for? What is Goodreads.com you ask? It is a website where you can keep track of the books you've read and the books you want to read. There is even an app you can put on your tablet and smartphone for those on the go. It makes it really convenient when you're at the bookstore or library to double check to see if you've already read the book you're about to buy or check out.

So, you're probably asking why I'm talking about Goodreads.com when this is supposed to be a book review of Mind Game by Iris Johansen. Well, another great benefit of being on Goodreads.com is that publishers and authors list their books on the website and members can enter to win advanced copies of books or books that are already out on shelves. This is how I came to read Mind Game by Iris Johansen . . . I entered a giveaway for the book on Goodreads.com, and I was a winner. I received an advance uncorrected proof of Mind Game for free for an honest review.

Mind Game is the twenty-second book in Iris Johansen's Eve Duncan book series and focuses on Jane MacGuire, Eve Duncan's adopted daughter. Jane is on a quest to find a treasure that a woman named Cira had buried by a lake in Scotland centuries before. But, she keeps having dreams about a girl that is in trouble. Jane is trying to find out if the girl is real or not so she can save her.

This is only the second book I've read by Iris Johansen, and it just happens that the other one I read by her was also part of the Eve Duncan series. I enjoyed Mind Game way better than the other book I read in this series. The story line is very action packed from the beginning and has two plots intertwined. Usually having two plots isn't very cohesive, but Iris Johansen pulled it off quite nicely in my opinion. Although this was more of an action novel, there was a bit of romance intertwined, which gave it a more realistic feel. The characters were very well developed, which you don't always see in a book series, and I found that to be quite refreshing.

Don't expect Mind Game to be a deep read though. It's more of a thrilling beach read that keeps you on the edge of your seat. I definitely recommend this book to others, and the nice thing is that you don't need to read any of the other books in the series to know the back story. Iris Johansen does a very nice job of bringing readers up to speed of things that happened in previous books without it being too obvious that she's doing that. I gave Mind Game 4 out 5 stars.