After spending the night celebrating the end of the school year with her colleagues, teacher Cass decides to drive home instead of spending the night with her friend. Calling her husband to let him know she will be home after all, Matthew requests that she not take the shortcut home through the woods. After a split second decision, Cass decides to take the shortcut home despite promising her husband that she wouldn't and happens across a car that is pulled onto the shoulder of the road with a woman sitting inside.

Fast forward to the next morning, Matthew tells Cass that he is relieved that she didn't take Blackwater Lane home as a woman was found murdered in her car on that road. Thankful she didn't get out of her car to check on the woman, Cass can't shake the guilty feeling of not helping her and that her husband will find out that she disregarded his simple request, but Cass has bigger problems to worry about . . . she keeps forgetting things. On top of that, she keeps getting calls from someone who doesn't say anything and feels like someone is watching her every move.

The Breakdown by B.A. Paris is a fast paced psychological thriller that is unputdownable. It took me 4 days to read the book, but the majority of it was read in two days. I kept telling myself, "Just one more chapter." Seriously, this book was so good that I lost a good amount of sleep due to reading into the wee hours of the night.

The set up of the book was done exceptionally well . . . it takes place in a rural location where cell reception is next to non-existent, giving it that extra creepy feeling of really feeling like bad things are going to happen and no one will be able to save Cass in time. I wish that there had been some thunderstorms while I was reading The Breakdown so I would've had that extra creepiness while I read, but alas, I was not fortunate in that area.

My only qualm with The Breakdown is that I partially figured out who the bad guy was relatively early on, and I had to restrain myself from flipping to the end to see if I was right. I was enjoying the book so much that I didn't want to ruin it for myself. With that being said, there were a couple of times where I wondered if another character had a hand in it . . . there was an accomplice, but it wasn't who I thought it would be. 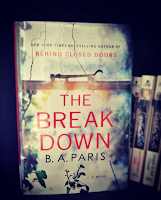 I loved the ending because it showed that Cass was a strong person and wasn't putting up with anyone's crap. It's nice to have a female lead that stands up for herself in the end. What I did hate was that the ending was a little rushed to me and the fact that the people Cass couldn't really trust the people closest to her.

The Breakdown lived up to all the hype around it, and I enjoyed it a lot more than B.A Paris' first novel, Behind Closed Doors. I feel like the author redeemed herself with this book, and I will definitely read more of her books in the future.