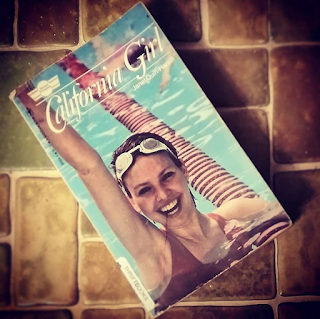 California Girl (Sweet Dreams # 6) by Janet Quin-Harkin is part of the teen romance book series, Sweet Dreams. The books in this series are written by different authors and rarely have anything to do with any of the other books in the series. The one exception to this that I'm aware of is P.S. I Love You (Sweet Dreams # 1) and Falling In Love Again (Sweet Dreams # 23), both written by Barbara Conklin. I fell in love with the Sweet Dreams teen romance books in middle school after discovering them at the school book fair. They ended up being very hard to find at the libraries . . . the school library and the public library branches didn't have any of these books to check out. And, I had trouble finding them in local bookstores, so whenever I came across one, I had to buy it.

In California Girl, we meet Jennie, who is an aspiring Olympic swimmer and has just recently moved to Texas. Absolutely miserable with her new swim team and new school, all Jennie wants to do is move back to California. She meets Mark, who was the high school football star and now is a has been due to a serious injury that left him unable to walk without crutches. Since Mark's accident, no one has anything to do with him except for Jennie. When she sees his artwork, Jennie decides to enter him into an art contest without him knowing, and he wins. Now, Mark has become popular again, and Jennie rarely sees him. Is it over between them for good?

From the very first minute I started reading this book, I was sucked in, even as an adult. It was extremely well written, especially compared to some of the other books in the series, and I wondered why. After looking at the cover of California Girl for the millionth time, I finally paid attention to who the author was . . . Janet Quin-Harkin. She was one of my favorite authors as a teen, so it was no wonder I enjoyed it so much. After finishing the book, I decided to google the author, and I found out that she writes adult novels under a pseudonym, so I can't wait to buy one of them!

It's a perfect book for tweens and teens because it is super age appropriate, and it does deal with the typical high school drama. Even though it was written in the early 1980's, I think kids today will still relate to it. I think that people who swim competitively will especially relate to it. The only thing I was disappointed in was that we don't find out if Jennie makes the Olympic team.