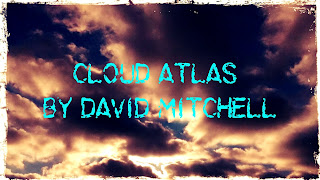 1850, Adam Ewing, a notary, is traveling home to California on a ship. 1931, Robert Frobisher, a composer, orchestrates a way into a sickly maestro's home. 1970's, Luisa Rey, a journalist stumbles across a story that threatens her life. Present Day, a Korean superstate has overtaken England. Post-apocalyptic Iron Age, the last days of Earth on Hawaii. Then, we go back in time in reverse order, finding that all the characters are connected and intertwined.

Cloud Atlas by David Mitchell was a book selection for the first book club I ever joined. It isn't a book that I would've ever picked up to read on my own. I loved the concept of the story when I read the synopsis and was looking forward to reading it.

Typically, I don't mind when a book jumps from one time period to the next, but with Cloud Atlas I did mind. It took away from the overall story line and made it very choppy. It felt like five distinct short stories, not a cohesive story. The only two story lines that I somewhat enjoyed were the stories of Robert Frobisher and Luisa Rey, but by the time we got to finish their stories, I had to go back and reread the first half of their story because I had forgotten some of the small details.

Another thing I disliked about Cloud Atlas was the post-apocalyptic story line wrote words like they might have been spelled before human kind became a civilized, educated society . . . the spelling of words made it difficult to get through.

There are so few books that I can say that I disliked reading, but Cloud Atlas is one of those books. I felt like David Mitchell was trying to force a moral story down my throat to teach me of what could happen in the future if we didn't heed the mistakes of the past. Don't get me wrong; I don't mind stories that have a moral to teach, but I just wasn't in the mood for this type of story. I gave it one star out of five stars.