Book Review: The Devil's Tickets: A Vengeful Wife, a Fatal Hand, and a New American Age by Gary M. Pomerantz 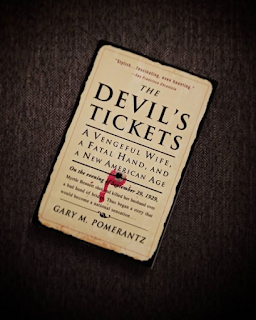 1929, Kansas City:  Myrtle and Jack Bennett invite another couple over to play Bridge for the evening. During the competitive game, Myrtle grumbles that Jack is lousy player, and he slaps her and announces that he's leaving. Moments later, Myrtle shoots and kills her husband. Subsequently, Myrtle Bennett is put on trial for the murder of Jack and is represented by onetime presidential candidate, James A. Reed.

I won The Devil's Tickets: A Vengeful Wife, a Fatal Hand, and a New American Age by Gary M. Pomerantz in Goodreads.com's First Reads Giveaway. Entering the giveaway because I thought the book sounded intriguing, I was ecstatic when I found out that I actually won a copy of the book.

However, it was a different story once I sat down to actually read the book. Although I don't read a lot of non-fiction, I do enjoy a well written account of events that happened in the past. This was not one of those books . . . it read like a text book. Painfully boring best describes The Devil's Tickets: A Vengeful Wife, a Fatal Hand, and a New American Age.

Knowing that the murder took place over a bridge game going into the book, I expected that there would be a bit of background about the game. However, I didn't expect it to go into such detail about it and Ely Culbertson, a Russian who made it an "ultimate battle of wits between men and women" and not such a trivial game. It felt like there wasn't enough information about the murder and the trial to actually write a book without heavily talking about Culbertson.

What I did find interesting was that James A. Reed represented Myrtle Bennett. He was a senator, attorney, and at one time was the Democratic Presidential Candidate. He was friends with William Randolph Hearst and represented Henry Ford. It seems odd to me that someone who ran with such wealthy, well known people would get involved in this case. However, it did make me want to learn more about him, but I have yet to see if there are any biographies out there about him.

Unfortunately, I would not recommend The Devil's Tickets: A Vengeful Wife, a Fatal Hand, and a New American Age to anyone. I gave it one out of five stars on Goodreads.com.