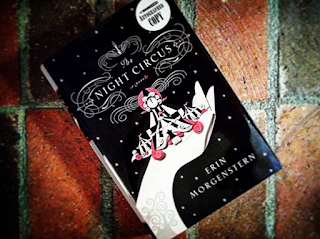 It appears suddenly with no announcements, no advertising. Yesterday, there was nothing, and today . . . today there is Le Cirque des Rêves . . . a circus like no other. Mystically delightful in shades of black and white and unique acts you'll find no where else. Unbeknownst to those involved, a game is taking place within the walls of the tents . . . a chance of only one to remain left standing.

The Night Circus by Erin Morgenstern was published in 2011 and was a selection for one of the book clubs I joined. I promptly bought the novel on my e-reader, a Literati sold by Brookstone. It's in this book club that they announced that the author was doing a book signing with a local bookstore, The FoxTale Book Shoppe, and I immediately bought tickets to attend, and it included a copy of the book that would be signed at the event. Was I ever glad that they allowed us to pick up the books early because my Literati died on me in the middle of the book and wouldn't power back on, even after being charged.

What an amazing night it was . . . Erin Morgenstern read a passage from The Night Circus and discussed how she came to write the book and get it published. She started writing the book during NaNoWriMo (National Novel Writing Month), and what she had written was vastly different from the finished product. Morgenstern shopped the manuscript around and had two or three publishers interested in the book. However, they all had suggestions on what she needed to rewrite for it to be publishable. She procrastinated on making any of the suggested changes because she didn't think them necessary. Eventually, she decided to make the changes that were suggested by one of the men, and the rest is history. We were allowed to have our photo taken with her, and I accidentally deleted my photo. She was very gracious, and let me take another photo with her, even though my time with her was over.

Words cannot even begin to describe how wonderful The Night Circus is written. It's one of the few books that I became so absorbed in that when it was time for me to put it down, it was hard for me to remember where I was and who I was. The descriptions and imagery were the best I have ever read in a book . . . all others pale in comparison. I wouldn't even be able to begin to tell you what genre it belongs in either . . . it has a bit of everything:  romance, action, fantasy, and more! I can't think of one thing that I disliked about the book  . . . I could just gush about how wonderfully written it is.

Throughout the book, there are midnight suppers that are extravagant with food, drinks, and entertainment. I loved these parts and decided to have my own midnight supper where everyone had to dress in shades of black and white with a touch of red. Why the dress code? In the book, a select group of people were considered to be the most important guests and would receive the schedule of the circus so they could follow it from city to city. These V.I.P.s dressed in the same colors of the circus (shades of black and white) but wanted to distinguish themselves from the actual entertainers, so they would add a touch of red . . . be it a red tie, a red pocket square, a red hat, etc.

My advice . . . if you haven't read The Night Circus, run, don't walk, to your nearest bookstore or library and get this book (or download it to your e-reader or tablet). Seriously, you won't regret reading this book. I gave it five out five stars on Goodreads.com, and I would've given it more start if I could have.