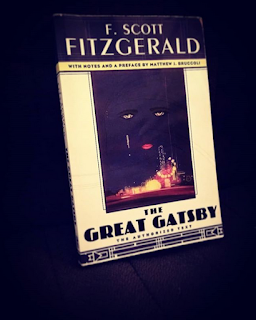 As a high school student, I absolutely loved reading The Great Gatsby. I was enchanted with every book we read my junior year, but I remember this one being one of the ones that I enjoyed the most. When one of the book clubs I belong to decided to read this book, I was excited to reread it as I didn't remember a lot about it, and it allowed me to refresh my memory before the Leonardo DiCaprio version of the movie came out. As an adult, I wasn't nearly as enchanted with it as I was as a high school student.

There isn't a lot of plot to the actual story; the little plot there was moved extremely slow. Basically, Jay Gatsby, the narrator, is a very wealthy man who lives on Long Island in New York and is in love with Daisy Buchanan. He throws a lot of lavish parties where there is a lot of drinking going on. And, then, there is a car accident where a woman ran into the street and was killed by a speeding car.

However, the character development and the visual descriptions were done very well. The descriptions were so good that it really made me dislike all of the characters. They all seemed very self absorbed and unlikable, which is one of the big contributing factors of why I didn't like The Great Gatsby the second time around. I like some of the characters to at least have some redeemable characteristics. Other than there being good character development and visual descriptions, the best thing I can say is that it was an easy, fast read with it being less than 200 pages.

If you enjoyed this book the first time around as a high school student like I did, then I recommend not reading it again as some of the shininess and allure wears off as an adult. My rating is 2 out of 5 stars.