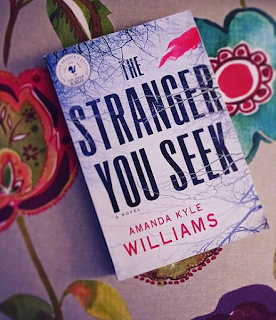 Atlanta, GA - The local media is receiving letters from a serial killer on the loose, and whoever it is, is promising that they will kill again. The Atlanta Police Department is under pressure to find the killer before they strike again. Enter Keye Street, a former FBI profiler, who currently finds work in the form of capturing bail jumpers and other detective work. Determined to make a connection between the victims and the serial killer, the killer may be closer to her than she realizes.

The debut suspense novel, The Stranger You Seek by Amanda Kyle Williams, is a must read book. I couldn't put it down once I picked it up, and it was one of those books that was so good, it made you want to call in sick. Unfortunately, I'm too responsible to actually call in sick to finish a book, so I had to settle for reading it on my lunch hour. Before I gush about the book, let me begin with telling you that I won The Stranger You Seek in a Goodreads.com First Read Giveaway back in 2011.

One of my favorite things about the book is that it takes place in Atlanta, Georgia and the author mentions several places I've either been to or driven past and even local roads that are there. She even mentions famous cases that took place in the city. I love knowing that the places that are mentioned are actually real places and knowing what they look like when I read the book.

Even though this is a suspense, thriller, and police procedure book, it does have a few lighthearted moments, and I loved that about this about it because it kept it from being too depressing of a read. I've heard several people compare this book to Janet Evanovich's Stephanie Plum book series, but I'd have to disagree with that comparison. The writing styles vary greatly in my opinion.

With The Stranger You Seek, it had more character development than most of the books in the genre, which is a nice change. It was also very descriptive to make you feel like you were right there with Keye Street (the main character). I gave this novel 5 stars out of 5 stars as there wasn't one thing I would've changed about it.

There are two other books in the Keye Street series . . . Stranger in the Room (Keye Street # 2) and Don't Talk to Strangers (Keye Street # 3). Recently, I've been wondering if she was going to write any more books in the series, and I just found out that the author, Amanda Kyle Williams, passed away on August 31* of this year after her battle with cancer. This makes me super sad because she was such a talented writer.  May she rest in peace.