Book Review: The Book of Life (All Souls Trilogy, # 3) by Deborah Harkness 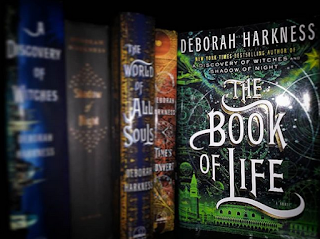 Picking up immediately after Shadow of Night (All Souls Trilogy, #2) by Deborah Harkness, The Book of Life (All Souls Triology, #3) opens with Matthew de Clermont and Diana Bishop traveling back to the present time from 1591 to encounter new and old issues. Emily Mather, partner of Diana's aunt Sarah, has passed away. Diana is now a blood sworn daughter of Philippe, and the rift between Matthew and his brother grows even larger when Baldwin finds out that Matthew has blood rage. Benjamin, son of Matthew, also has blood rage and is playing a cat and mouse game with Diana and Matthew. In search of Ashmole 782, aka The Book of Life, and Benjamin, Diana and Matthew must take on their enemies in one final battle.

What can I say about The Book of Life by Deborah Harkness? This is my second time reading it and is absolutely fabulous and even better than I remember. There is so much that happens in this third and final installment of the All Souls Trilogy that the almost 600 pages fly by quickly without feeling rushed. I laughed and cried, and my heart even pounded in parts. There are very few books that suck you in from the beginning and make you feel like you're right there with the character, and this is one of those books. If you haven't read A Discovery of Witches (All Souls Trilogy, #1) and Shadow of Night (All Souls Trilogy, #2), then it would be advantageous to read those two books before reading The Book of Life. Otherwise, you'll feel a bit lost. This review does contain a few spoilers from this point on.

“If you truly love someone, you will cherish what they despise most about themselves"  - Fernando Conclaves - 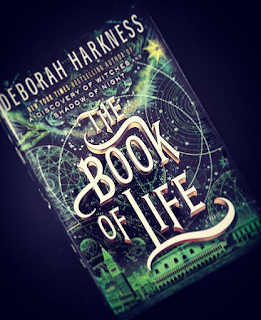 In the The Book of Life, I love the fact that Deborah Harkness brings back several of the characters from the previous books, some of which had minor parts. She even gives Philippe de Clermont and Emily Mather a minor part in the third installment . . . of being ghosts who are watching the events taking place in Sept Tours and knowing that when resolution has been found, they'll no longer be needed. Benjamin is the most despicable character in my opinion and had a very minor role in the second book and a larger one in this installment. We find out that he is responsible for making Philippe go insane during World War II. Throughout the book, Benjamin makes Diana's and Matthew's lives a living hell in various ways. I dislike the parts with him in it and wanted to hurry through those sections. It was easier to keep up with all the characters with my second read through of the entire series because everything was fresher in my mind, so I do suggest reading them all at once before reading any other books.

"The disgust. The fear. The dislike of anybody who doesn't conform to your simpleminded expectations of the world and how it should work." - Diana Bishop -

The above quote is a powerful one in my opinion. My take away from the All Souls Trilogy is a lesson to accept people for who they are, even if they are different from you. I hope that if readers take away nothing else, they take away this particular lesson.

Deborah Harkness does a great job of wrapping up the trilogy but still allows a few hanging ends, which is great because it allows for other stories to be told, even if they are just stand alone books. I am hoping for more books, especially ones told from Diana and Matthew's children and one from Gallowglass. In September 2018, a book was released in conjunction with the All Soul's Trilogy called Time's Convert. It tells the story of Marcus, who is one of Matthew's vampire sons. I can't wait to read it!