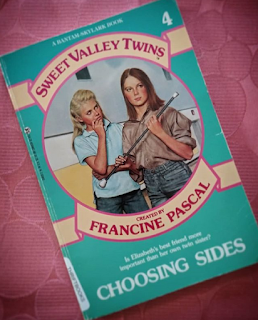 The Unicorns have decided to start a cheerleading squad at Sweet Valley Middle School and call it the boosters. The caveat put forth by teachers are they must have open tryouts. Amy Sutton decides she wants to try out for the boosters. While that is happening, the basketball team is holding open tryouts as well, and the shortest boy in school, Ken Matthews, decides to try out.

Choosing Sides (Sweet Valley Twins, #4) deals with bullying yet again. Do you see a theme in this series? Bullying seems to be most prominent in the middle school years, so it isn't surprising that the Sweet Valley Twins books deal with this subject a lot. The underlying themes are friendship and standing up for yourself in this edition.

The Unicorns try to bully Amy because they don't want an unpopular, tomboy on the cheerleading squad. On top of that, Elizabeth is worried that if Amy makes the boosters, she won't have any more time to spend with her. Bruce Patman bullies Ken Matthews just because he is the shortest boy in school and is not the best player. Elizabeth helps out Ken with some suggestions and by having her older brother, who is a basketball player on one of the high school teams, give him some pointers as well. I love the fact that despite being bullied, both Amy and Ken stand up for themselves because they know their self worth, and they do it without getting into a physical fight. Kids need to know how to do this better.