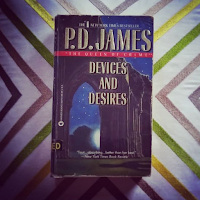 A serial killer is preying on young women in Norfolk. Moments before dying, a woman  appears on the roadway with a small dog. When all is said and done, the victims are found with their own hair stuffed in their mouths. The killings have becoming more frequent since the first death fifteen months ago. The serial killer has been dubbed The Whistler. Police Commander Adam Dalgliesh arrives in Norfolk on holiday to stay in a converted windmill that was left to him by his late aunt. Dalgliesh only becomes involved in the case when he discovers a strangled body that turns out to be the acting administrator of an atomic power station.

Devices and Desires by P.D. James is not a book I would've probably picked up to read on my own. However, I enrolled in a 20th Century World Literature class at my university, and we had 8 books that were required reading for the eight week course. Devices and Desires was one of those on the list, and I was excited to read it because I heard good things about author, P.D. James.

What I loved about the book was that there were several sub-plots throughout that kept me guessing as to the identity of the killer. This is what made the story line more realistic to me because real life is full of sub-plots whether you're aware of them or not. With all the twists and turns, I had trouble putting the book down.

Something that surprised me was that this being the eighth installment of a detective series, I would have thought that Adam Dalgliesh would have had a more prominent role seeing as he is the character the entire series is based on. With that being said, it didn't detract from me liking the book.

The premise of the story suggested that atomic power station played a large part, but it was hardly mentioned. Any time it was brought up, it seemed to detract from the story, and it quite annoyed me when I came to those parts as it didn't seem to flow as well as  other sections. It almost seemed like an after thought. This in fact is what made me give Devices and Desires four out of five stars instead of a perfect score.

Devices and Desires isn't for everyone as the style of writing seems more old fashioned compared to many of the modern day writers. I would recommend this book to people who also enjoy books by Agatha Christie or Arthur Conan Doyle.