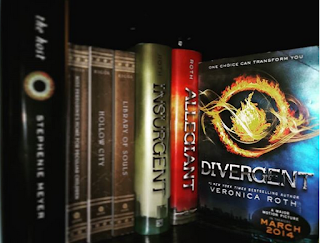 Chicago, Illinois, is a city that has become its own dystopian world which has divided society into five different factions based on a particular virtue: Honesty (Candor), Selfless (Abnegation), Bravery (Dauntless), Peaceful (Amity), and Intelligence (Erudite). Each year, those factions come together for a ceremony where all the sixteen year olds must choose which faction they want to live in for the rest of their lives. To help them make this decision, they all take a test prior to the ceremony that tells them which virtue is their best one, but despite what the results show, the choice is still theirs to make. Beatrice Prior learns a deadly secret about herself during testing and surprises everyone with her faction choice. During the initiation, she renames herself Tris and struggles along, not really knowing who her true friends are. Does she keep her secret and survive the initiation?


A few years ago, it seemed like all anyone (kids and adults alike) could talk about were a few young adult book series that had become a sensation. Among those were the Divergent books by Veronica Roth. I was a bit hesitant to pick it up after reading The Hunger Games by Suzanne Collins because I wasn't overly enchanted with Collins' series as everyone else was, and I didn't want to be let down by yet another YA Book Series. Was I ever glad I decided to give Divergent a chance. Once, I started reading it, I couldn't put the book down . . . I read it over a period of four days. It was one of those books that just hooks you into the story line right away.

In Divergent, once you choose your faction, it becomes your new family . . . you live, breathe, and eat the values of your faction. What I love about the book is that even though there are all of these outside forces telling the characters to forget about their family, in the end, your real family will always be there for you through thick and then, no matter what. I felt like family was a great theme throughout the entire series.

Another theme throughout the entire series, not just Divergent, was society and values. (This is not an invitation to a political discussion.) I felt like Roth gave great insight of what the world could possibly come to in the future. Most people have a mixture of all the factions in them, but we usually label people as just one of them. Think about it . . . people tend to say a person is smart or honest or selfless. Why not celebrate all the qualities in a person instead of labeling them as just one thing?

I did only give Divergent four out five stars because I felt like a few of the ideas were loosely based on other books and that detracted a little from the overall experience of the book. But, man, this story took me for quite a ride, and it was nice to have a fiction book geared towards young adults that actually made me think about some big issues out in the world. This is a must read for both young adults and adults alike.