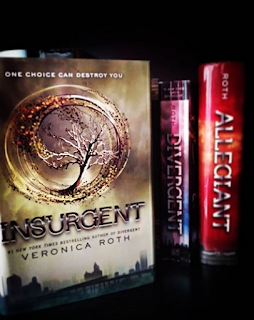 Choices have consequences . . . the factions are in unrest and with war looming, Tris, Four, and several others are seeking shelter with the Amity faction. When Erudite and Dauntless factions arrive looking for refugees, traitors in their eyes, they know they must move on and join forces with the factionless  only to find out some surprising news.

Insurgent by Veronica Roth took me only six days to read, and where I loved the sequel, I didn't enjoy it as much as I enjoyed its predecessor, Divergent. It doesn't really surprise me that I felt this way because it seems to be a pattern with me and sequels . . . I was let down by New Moon by Stephenie Meyer and Catching Fire by Suzanne Collins.

The reason that I didn't enjoy Insurgent as much was that there were a few places that were a bit slow. Another reason, and I can't believe I'm going to say this, is that as much as I love romance to contribute to a story, I don't want it to take away from the story, and I felt like it did a bit in this story.

Things I did love about this book is that it picked up immediately after the last book. I also liked that things aren't always what they seem, and there was a huge reveal to Four's backstory. I won't go into any specific details as to what it was as to not spoil it for those who haven't read the book yet, but it's good reveal in my opinion. And, oh my god, the ending was fabulous. I didn't see it coming, but in retrospect, there really wasn't any other way Insurgent could have ended.

Even with me giving Insurgent three out of five stars, I adored this book, and I don't normally like dystopian books, so that is saying something. I definitely would recommend it to everyone.