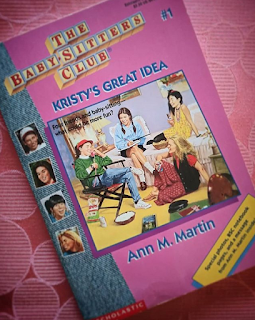 Kristy Thomas is a seventh grade student at Stoneybrook Middle School. She babysits in the afternoons after school and on the weekends. After Kristy witnesses her mother make several phone calls to find a babysitter for David Michael, she comes up with a great idea. What if parents could call one phone number and reach several babysitters at once? Excited by her plan, she recruits her friends Mary Anne Spier and Claudia Kishi and newcomer Stacey McGill to help her start The Baby-Sitters Club. Follow their adventures as they get prank phone calls, parents who lie, and more.

What can I say about Kristy's Great Idea (The Baby-sitters Club, #1) by Ann M. Martin? When I discovered this series as a child shortly after discovering the Sweet Valley Twins series, I was intrigued by the basis of the story and was excited to read the first book. I enjoyed it so much that I desperately wanted to start my own babysitting club but that wasn't in the cards for me.

As an adult, I was feeling nostalgic about the books I read as a kid and decided to reread The Baby-Sitters Club. I wasn't disappointed with my reread of Kristy's Great Idea. Geared towards kids between the ages of 8 - 12, it is written extremely well and deals with real life situations that might be going on in a child's life. For example, Kristy's parents are divorced, and her mom is seriously dating a man. Kristy is very unhappy about this and acts rude towards Watson, the man her mom is dating. Mary Anne's father is very strict with her, partly because he is overprotective of his only daughter since his wife (and mother of Mary Anne) passed away. Claudia's parents think school is extremely important and constantly on her to do better in school.

Some may think that Ann M. Martin did a disservice to the series by making each of the girls known by one personality trait instead of several, but I would disagree with that thought process. Although everyone has several personality traits, people usually have one that really stands out, and people are typically known by that trait. Plus, this is a kids book, and it wouldn't be advantageous to get that deep into the character personalities because kids typically don't have a huge attention span.

Kristy's Great Idea (The Baby-Sitters Club, #1) was everything I remembered it to be, and I would definitely recommend it to those with kids aged between 8 - 12. Even though some of the material may be a little dated, I think kids could easily get past that and enjoy the book. I gave it four out of five stars.
Follow Us On Social Media