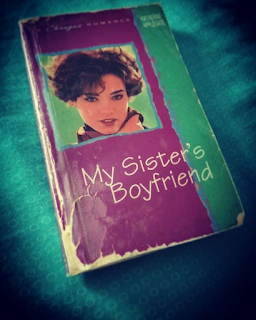 My Sister's Boyfriend (Changes, #9) by Katherine Applegate is part of the HarperCollins Changes Romance series that was published in the early 1990's. Even though it is part of a series, it is a stand alone book that has nothing to do with any of the other books in the series. As a teenager, I discovered another book in the series before this one, On My Own (Changes, #10) by Janet Quin-Harkin, and it led me to purchasing this particular book. The genre is romance, but I would classify it as romantic comedy.

Rereading this as an adult, I still found myself laughing at some of the same parts that I did as a teenager. Mainly those parts having to do with the little brother and the best friend Lucas. Even though this is a relatively short book geared towards tweens and teens, you still get a fairly good sense of character development. It was a well written book that still keeps my attention as an adult.

With that being said, there were a few things that I didn't particularly like . . . okay, maybe it was just one major issue and a minor issue. As a former beauty pageant kid, I had issues with some of the parts regarding beauty pageants. It is very rare for a person to just sign up for a pageant and win it as a beginner. I don't think I have ever seen a contestant have acting as their talent. It just doesn't happen. At least, not when I participated in them for an eleven year period. The minor issue I had with My Sister's Boyfriend is a lot of the scenarios aren't exactly believable . . . the mom doesn't cook because she doesn't trust appliances, so they bring home take out food or eat out, but because of this, it does bring some additional comedy to the book.

My Sister's Boyfriend is a perfect type of romance book for girls aged 11 and up because it never really deals with sex. All the romantic scenes are pretty innocent with the characters just kissing. Even though it was written in the 90's and there really isn't any modern technology mentioned, I think girls would still find it relatable.

Synopsis:  After receiving news that her play won a local playwright competition, Justine and her family have a celebratory dinner at home. When her crush from the summer before shows up at that dinner and is introduced as her sister's new boyfriend, Justine is in shock and will go to no ends to hide the truth from Skyler.