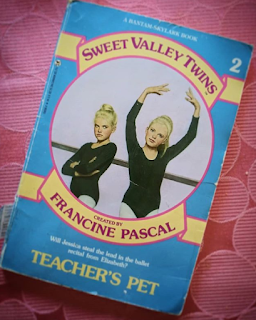 Identical twins Elizabeth and Jessica Wakefield are auditioning for the lead role / solo in their dance recital. Elizabeth doesn't want to compete against her twin. Jessica knows she is the best dancer. The only problem is their ballet teacher never notices her because Elizabeth is teacher's pet. Who will land the lead role?

Teacher's Pet (Sweet Valley Twins, #2) is told mainly from the view point of Jessica Wakefield, and we get to see her personality more in depth than we did in the first book of the series, Best Friends. Jessica's prominent personality trait is that she is selfish and that is carried throughout the entire series. With that being said, I totally empathized with her in the scenario of the book. Spoiler Alert:  Elizabeth lands the lead role in the dance recital even though she doesn't dance nearly as well as Jessica does. With that being said, Jessica was a prima donna in their first ballet class, and Madame Andre holds that against her.

Who hasn't been in a situation where you've been overlooked for something and someone else was awarded with what you wanted? So, that is why I feel for Jessica despite her being so selfish. I love the fact that the life lesson in Teacher's Pet was that you don't always get what you want, but I felt like they screwed up the lesson partially because Jessica ended up getting what she wanted because she sulked about it so much. It makes it look like you can sulk or throw a tantrum to get what you want. With that being said, there is another lesson to be learned here. Elizabeth realized that she wasn't the best dancer, and her sister really did deserve the part. So, she decided to take matters into her own hands, be the bigger person, and let Jessica dance in her place.

There were a few things that happened in the book which weren't believable, and it irked me as an adult. For that matter, I remember that it bothered me the first time I read it as a child. Typically, you don't start taking ballet classes at age 12. Before you jump down my throat, yes, I know there are always exceptions to the rule . . . but I said typically. There is also the last minute phone call from the dance teacher to schedule a dance class for that afternoon. That never happens! Dance classes are scheduled for a particular time and day, and that is when you have your class. Now, if a dancer was having a private class, it would be a different story if it needed to be rescheduled, but you still would have more notice. And, the last thing that wasn't believable is that an announcement was made that there would be a dance recital in a few weeks. All of the dance studios I went to had the recitals scheduled far off as in the end of the year, and you learned the number over a period of months, not weeks.

Because of the believability issues, I only gave Teacher's Pet four out of five stars. I'd definitely recommend this book to kids between the ages of 8-12. Although, some kids who are younger or older might enjoy it as well.