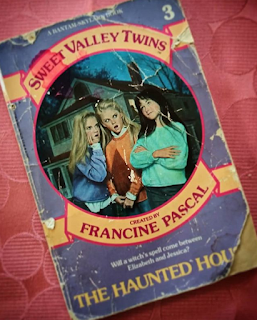 The Mercandy mansion is said to be haunted because lights flicker in the windows at night, and the owners are never seen. Just ask anyone at Sweet Valley Middle School . . . they'll swear it is haunted. When Nora Mercandy moves into the house, rumors about her being a witch spread rapidly throughout the school. Elizabeth Wakefield sets out to solve the mystery of the Mercandy mansion and prove that Nora is just a normal girl.

The major theme of The Haunted House (Sweet Valley Twins, # 3) created by Francine Pascal is bullying. Because of rumors about the Mercandy house, people jumped to conclusions about Nora and began picking on her. Lila was the ringleader of it all and was merciless. The underlying theme is to not jump to conclusions. The majority of the students at Sweet Valley Middle School made assumptions about the Mercandy family because of things they had seen and heard. Those assumptions were gossiped about and spread around. Everything was easily explained had the students just taken the time to get to know Nora and her grandparents.

With it being first published in October 1986, it is sad that over 32 years later, bullying is still an issue among kids, and it seems to be more rampant and more intense now. What is even sadder is that those children became adults and are likely to still be bullies. As an adult, the amount of bullying I have seen among other adults is unbelievable. Some people just never grow up and are miserable no matter what.

Because The Haunted House had a little bit of a mystery in it, I enjoyed this book quite a bit. However, I felt extremely sorry for Nora both times I read this book (as a child and an adult), and it still miffs me that Lila never really gave an appropriate apology. I mean the poor girl just lost her mother. I'm glad that Nora ended up making some good friends and the bullying stopped. However, I'm not okay with how it was resolved. Why is it that no one really got punished? I'm guessing that it is teaching kids that life isn't always fair and suck it up and deal with it.