Book Review: The Icing On The Cupcake by Jennifer Ross 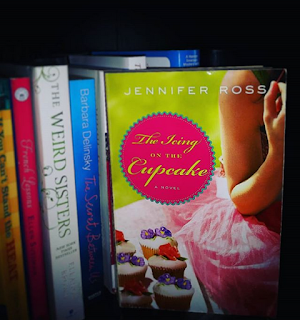 Southern belle Ansley Waller's ultimate goal is to get a diamond ring, but her life is turned upside down when her fiancé calls off their wedding. Embarrassed by her predicament, Ansley leaves Dallas, Texas to live with her recently widowed grandmother Vivian in New York City. Tired of her granddaughter wallowing in misery, Vivian gives Ansley an ultimatum . . . get a job or go home. Ansley decides to open her own bakery, and before long, she's even dating. However, the men in Manhattan are vastly different than the ones back home, and her flirting falls flat. On top of that, someone is trying to sabotage her new business.

The Icing on the Cupcake by Jennifer Ross is not a book I normally would have picked up on my own, but it was a book club pick. It definitely falls into the categories of chick lit, cozy mystery, and beach reads. Let me begin with what I actually liked about the book. I enjoyed the recipes at the end of each chapter, and I swore I would make some of the recipes. However, that has yet to happen. The other things I liked about it was that it was entertaining to a point, an easy read, and I did want to find out who was sabotaging the main character Ansley. So, it is written well enough that it made me want to finish the book.

With all of that being said, I hated how southern girls and women were portrayed because they are made out to be conniving, spoiled brats who will go to any lengths to get what they want without caring who they step on to get there. I will be the first one to say that there are those types of people in the South, but to stereotype every single one them like that is a bit much for my taste. On top of that, it wouldn't take Ansley's fiancé Parish two years to find out how catty and mean she actually is. One of the lessons I learned in my communications classes in university was that people can't hide their true selves for long, and true personalities start to emerge after six months.

And, the most outlandish things about the entire book is that Patty (who is now engaged to Parish) sent her cousin Dot up to New York City to spy on Ansley, become friends with her, and report back to Patty because she is that jealous that Ansley might just be successful at something. Who does that? On top of that, Patty is so insecure that she travels to NYC herself and tries to run over Ansley with a car. Then, Parish visits Ansley in the hospital and wants to get back with her. Seriously? Can we say this is an absolutely ridiculous scenario.

I truly wanted to love The Icing on the Cupcake, but I didn't love it. There were way too many negatives for me, and I could only rate this book two out of five stars.