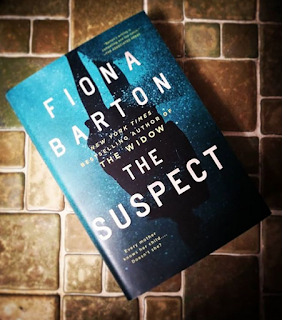 Two eighteen year old girls go missing while on vacation in Thailand during their gap year. Their worried families are thrust into the media spotlight, and all they want to know is what happened to their daughters. As journalist Kate Waters gets the inside scoop, she begins to wonder about her own son who she hasn't seen in two years. The story of the girls disappearance begins to unfold, and those involved find out that danger is closer than they know and the truth isn't always as it seems.

Let me begin by thanking Berkley | Penguin Random House for the free copy of The Suspect (Kate Waters, #3) written by Fiona Barton that I won on a First Reads Giveaway on Goodreads.com. I was thrilled to say the least when I found out I had been selected to read this book for my honest review. Not having read any of Barton's previous books, I wasn't sure what to expect, but I loved the premise of the story. What I already knew was that this was the third installment in the series, and normally, I won't read a book in a series until I've read all of the predecessors. However, I made an exception in this case because I just couldn't wait to read The Suspect. I wasn't disappointed.

Some of the things I absolutely loved about The Suspect was that it was told from different perspectives. I think a lot of authors tend to shy away from this style of writing because it is a difficult thing to do well, but Fiona Barton did an exceptional job with the multiple perspectives. I really felt like I got to know the characters this way. I also enjoyed it flipping between the present and the past. This is another thing that is difficult to do well in my opinion because I've read books where it was done poorly. However, this wasn't one of those books . . . Barton did a phenomenal job with flipping back and forth in time too.

One of the things I didn't like about this book is that there were a couple of words that I was unfamiliar with because they aren't commonly used in the United States, and I couldn't quite determine what they meant. I was fine with words like loo and telly because I was already familiar with those words. It makes me wonder if people in the U.K. or Australia have trouble with some of our "slang" words that aren't quite as common in every day conversation. And for the life of me, I can't remember what the word or two was that I was unfamiliar with. Other than that, the only thing I didn't quite like was the ending. Don't get me wrong, I love the fact that we found out what happened, and it had a definite conclusion. I didn't like the fact that it alluded that one of the characters really did have something to do with one of the murders.

Overall, I gave The Suspect (Kate Waters, #3) five out of five stars on Goodreads.com. If you love mysteries and thrillers, then this is a definite must read. I had trouble putting it down. Now I can't wait to go read the first two books in the series . . . The Widow (Kate Waters, #1) and The Child (Kate Waters, #2).