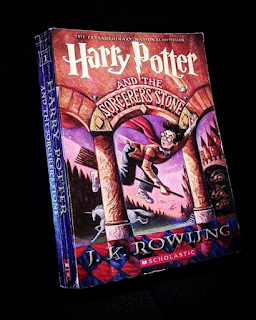 Harry Potter and the Sorcerer's Stone (Harry Potter, #1) by J.K. Rowling was published on June 26, 1997, two days before my birthday. However, with it being a children's book, I didn't hear much buzz about it until it was made into a movie a few years later. As additional books and movies were released, I continued to hear even more chatter from adults about the series and how they loved it. When I finally joined my first two book clubs in 2010, they were absolutely flabbergasted that I hadn't read any of the Harry Potter books. At this point, it was more that I was being stubborn about it and didn't want to jump on the bandwagon. In fact, I jumped on the Twilight bandwagon before reading this series. It wasn't until 2011 before I eventually broke down to read this series, and I read them all one after the other without really reading much else. By the end of the series, I was burnt out on it.

When I first picked up the Harry Potter series, I didn't realize that the first book Harry Potter and the Sorcerer's Stone had been published as an alternate title in the United States of America and differed from the one in the United Kingdom and elsewhere in the world. In the rest of the world, it was published as Harry Potter and the Philosopher's Stone. I cannot for the life of me believe that the head of Scholastic's children division thought it sounded too arcane and that was the reason he wanted to change the title for the U.S. audience. He should give us more credit than that. 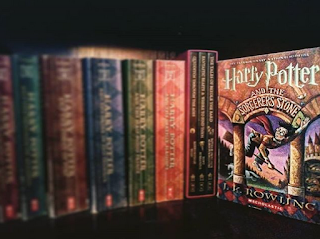 At first, I had to push myself through the first installment as it was, and still is, a bit young for me. I love the fact that J.K. Rowling decided to write a series that grew up and became more mature as the readers matured. Had I originally read it as a child and was rereading it, I am sure I wouldn't have had this problem. With that being said, Harry Potter and the Sorcerer's Stone is actually very well written, and I did enjoy the overall story line.

Additionally, Rowling does a great job of taking every day dilemmas and making them exciting and teaching lessons to kids about life in general. It even makes boarding school seem like an adventure. It is hard to believe that this was her debut novel. I gave Harry Potter and the Sorcerer's Stone three out of five stars . . . the only reason being it was a little young for me as mentioned earlier.

Synopsis of Harry Potter and the Sorcerer's Stone:  Harry Potter, an orphaned boy, lives with his aunt, uncle, and cousin at 4 Privet Drive. Unbeknownst to him, Harry is a wizard and has been accepted to Hogwarts School of Witchcraft and Wizardry. In his new world, Harry is enchanted by everything and everyone he sees. Follow his adventures in navigating a magical world.