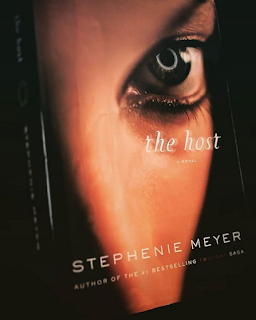 Synopsis of The Host by Stephenie Meyer, author of the Twilight saga:  Earth is being taken over by a species (souls) of another planet. The souls are inserted at the base of human skulls and take over their hosts minds while keeping the bodies intact. The purpose of the invasion is to keep humans from destroying the planet Earth. In fact, Earth isn't the first planet they've invaded; there have been many others. What isn't expected is when Wanderer has been given the body of a girl named Melanie, her host refuses to give up her thoughts and body. When Melanie fills Wanderer's mind with thoughts and visions of Jared, they both fall in love with him and set out to find him and other "wild" humans.

Stephenie Meyer published The Host in May 2008 just a few months before the final installment of her Twilight saga. I wasn't aware that this particular book came out before Breaking Dawn until now. I had assumed she wrote it after and should know better to do this [assume things]. Since I'm not a big fan of science fiction, I wasn't sure if I'd like The Host or not. Vastly different from her previous books, I'd definitely recommend haters of Stephenie Meyer to give her another chance with this particular book.

In my opinion, the biggest downfall of The Host is that it starts off very slowly. So slowly in fact that I almost stopped reading it. However, someone else had read it and told me to stick with it because it did get better. I was so glad that I listened to them because it did get better, but I'm not sure at what point it did. The slow start is the only reason I gave it four out of five stars.

I loved the fact that The Host explored what could happen if other life forms had the ability to reach our planet because I definitely do believe that there is life somewhere else in the universe. That doesn't mean I believe in little green men called aliens. I just think that as vast as the universe is, it would be very close minded to think that Earth is the only planet with human life forms on it. The book did remind me a little of the movies Independence Day and Invasion of the Body Snatchers.

Without giving away too much, a concept that I loved in this book is the interaction between the "wild humans" with Wanderer because it takes a look at acceptance and discrimination of people who are different. A life lesson I feel many people still need a lesson on . . . acceptance of those who are different than them. It doesn't mean you have to agree with them on everything. Love trumps hate. (And, no, this isn't me trying to get into a political debate, so please refrain from trying to start one with me.) Another concept I loved in The Host was survival of the fittest. The strong survive, and the weak die. You see this happen in nature all the time.

And, if you have been living under a rock, this book was turned into a movie in 2013. I'm not sure how it did in theaters as I watched in on Netflix. I enjoyed the movie. It was done well with such a difficult concept of "two people" living in the same body.