Book Review: On My Own (Changes, #10) by Janet Quin-Harkin 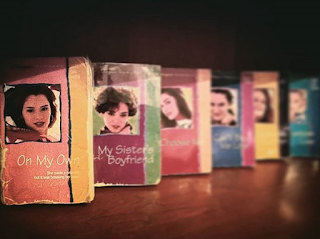 On My Own (Changes, #10) is part of a teen romance series that is written by various authors, and none of the books in the series have anything to do with one another. This particular book is written by Janet Quin-Harkin, who wrote quite a bit of teen romance books in the 1980's and 1990's. Actually, as a teen, this is the first book I read in the Changes Romance book series, and I absolutely fell in love with the story and read it so much that the front and back cover as well as the spine started to disintegrate. I taped the book up with clear packing tape to keep it from disintegrating further. As an adult, I wonder if the tape has acid in it and will eat away at it.

Rereading On My Own (Changes, #10) as an adult has given me quite a different perspective from the one I had as a teen and even as a young adult. The main character, Jamie Bolding, is dating a guy named Tom Harding, who is a popular baseball player. In the first fifty or so pages, Tom does nothing but pressure Jamie about having sex and even cheats on her. When I was a teen and young adult, I thought he was a jerk and wouldn't have put up with him at all. As an adult, I still feel the same way, but the character is definitely a predator and a user. I can't believe after what Tom did to Jamie that she still wished she was dating him. This is such a bad message to send to young girls.

On top of that, Jamie is looking for a summer job, and at age sixteen, she thinks she is too old to work at a day camp or fast food joint. What?!?!?! She decides to apply for an au pair position in Carmel, California without telling anyone because she wants to see if she can land the job first. That's fine if it was a normal baby-sitting job, but this position is 30 miles from home and requires her to be a live in nanny of a six year old girl. I don't know of any parent that would let their child take this position even after meeting the family. And, I certainly wouldn't be hiring a sixteen year old to care for my child day in and day out. 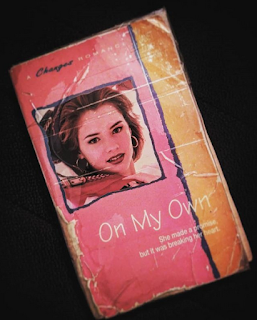 So, you've heard my beef with On My Own (Changes, #10) by Janet Quin-Harkin. Now for the things I absolutely loved about the book. It shows that children need the love and affection of their parents  as well as boundaries because if they don't, they can act out. I'm not a doctor or psychiatrist, so I'm not going to pretend that I have proof that children need this, but I think it's common sense that these are basic needs of children.

Jamie also learns a lot about relationships and family dynamics, and it forces her to grow up and show her family that she is a responsible person. On top of that, one of the best lessons it teaches the reader is that lying to your friends isn't worth it because eventually you'll get caught, and those lies can hurt the ones you care about and love. All in all, I loved On My Own (Changes, #10) by Janet Quin-Harkin. My teen self would have given it five out of five stars. However, the adult me gives it four out of five stars because I just can't overlook the negatives of the book.

Synopsis of On My Own (Changes, #10):  After the break up with her first boyfriend, Jamie Bolding makes a vow with her two best friends that the three of them will remain single until after high school and focus on bettering themselves. But, then Jamie meets Griffin, a sensitive, good looking boy. Will she keep her vow or break it?