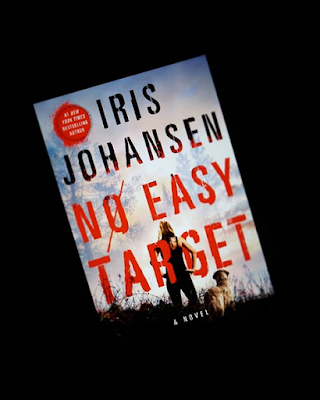 No Easy Target by Iris Johansen is a stand alone book that mentions characters from the Eve Duncan book series. Margaret Douglas had a troubled youth due to the fact that her father considered her a freak because she could talk to and influence animals utilizing telepathy. Escaping her father, she goes on the run to only be kidnapped and held prisoner by criminal Nicos. After escaping his grasp, Margaret has been on the run again for three years, that is until former CIA operative John Lassiter breaks into her apartment and eventually apprehends her.

This is the third book I've read by author Iris Johansen and by far my favorite so far. It was chosen as a book club read, so I'm not sure if I would have picked up to read on my own, but I am definitely glad I did read it. No Easy Target had a bit of everything in it . . . action, suspense, mystery, fantasy, and romance. It definitely had me on a roller coaster ride as I wasn't exactly sure how it would play out, but I was definitely happy with all the outcomes, and the story line flowed well. It is a stand alone book, but it has been written in a way that there will eventually be a sequel, hopefully. And, I want a sequel because I would like to see how the relationship develops between Margaret and Lassiter.

I loved the fact that the main character, Margaret Douglas, could talk with animals and that they would help her when she asked them for it. She genuinely cares about what happens to the animals as well. I absolutely loved this character. I also loved the character John Lassiter even though I didn't think I'd like at first because I thought he was going to be a bad guy. His right hand man, Cambry, was super likable as well. However, I kept reading his name as Camry. Nicos and Salva were the two main bad guys in the book, and they were absolutely detestable.

If you haven't read any of Iris Johansen's books, this is the one to start with in my opinion. I gave it five out of five stars . . . a definite must read. It definitely is perfect to take on vacation with you.